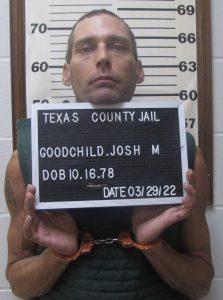 On the evening of March 28, 2022, Texas County deputies were dispatched to a residence on Pine Flat Drive in the Eunice area in reference to a suspicious death. Upon arriving at the residence, deputies located a deceased female with apparent gun shot wounds.

The female was identified as Nikki L. Goodchild, age 31. Next of kin was notified.

On March 29, 2022, Texas County deputies with the assistance of the Howell County S.W.A.T. and the Houston Police Department served a search warrant at a residence on Pine Flat Drive near the location where Nikki Goodchild lived. During the execution of the warrant Joshua Goodchild was arrested. Evidence was also recovered at Joshua’s residence implicating him in the murder of Nikki Goodchild. Joshua Goodchild is the brother of Nikki’s husband. The husband was working at a local business during the time period that the homicide occurred and is not implicated in the crime. The victim was discovered when her children arrived home after school.

Based on the investigation and evidence recovered at the residence, a probable cause statement was submitted to Texas County Prosecuting Attorney Parke Stevens seeking charges. Stevens charged Joshua Goodchild, age 43, of Eunice, with Murder 1st Degree, Armed Criminal Action, Burglary 1st Degree and Unlawful Use of a Weapon. Goodchild was ordered to be held in the Texas County Jail without bond.

Sheriff Scott Lindsey commented, “This is a tragic case, I pray for comfort for the family and friends of the victim. I also commend the effort of the deputies and assisting agencies that worked on this case to seek justice.”