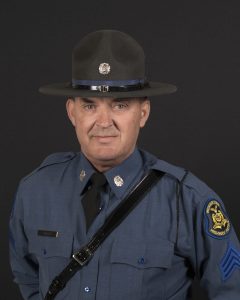 Kinder holds an Associate of Science in criminal justice from Columbia College and attended basic police training at the University of Missouri Law Enforcement Training Institute in Columbia, Mo. He was a member of the 67th Recruit Class with MSHP and was hired on July 1, 1994, continually serving with Troop G for over 27 years.

With a touch of humor, Kinder told students, “You get a new car and all the gas you need,” when promoting a challenging career in law enforcement, during his presentations as public information and educational officer.

In reality, prior to going into law enforcement Kinder was working at a factory and remembers thinking, “There’s got to be more to life than this.” He attended a presentation given by Mike Weaver with the MSHP and became interested in law enforcement.

Kinder approached his career with the same motto with which he approaches life, “I treat everyone like a member of my family, until they won’t let me anymore.” It has served him well.

His career is unique in that the challenges of the job are also the most rewarding, for Kinder and for society. It’s also a career that encompasses dealing with the toughest, most vicious and at times despicable lawbreakers, to assisting law-abiding citizens in their time of need.

He assisted in manhunts that resulted in the capture and prosecution of criminals such as Neldon Neal, a homicide fugitive who evaded police for months before being captured while living in a cave in Laclede County; Injun Joe Johns, a multiple homicide fugitive, who also escaped capture for several weeks; and a long-time child molester from Texas County, now serving a life sentence, who refuses to apply for parole because he knows that prison is the best place for him (sometimes capture and incarceration is a wake-up call for the perpetrators of crime).

He has worked more vehicle crashes that he cares to remember, including the worst, the most recent 47-vehicle pile-up in Mississippi County, and has dealt with road rage incidents on occasion.

Narcotics investigations resulted in 67 search warrants, and while Kinder has never been shot, he has been shot at. While working a nine county marijuana eradication assignment in cooperation with the National Guard in the ‘90s, a helicopter was brought in to assist. While it was a fun and unique experience to investigate from a helicopter, it was not without danger; upon landing, bullet holes were found in the aircraft.

“The prevention of injury to anyone is the most successful resolution,” he said.

His last call as a negotiator took place in Springfield, where unfortunately two children were being held hostage. Ultimately the children were killed, with the perpetrator committing suicide. Kinder was also assigned to the Ferguson riot detail.

Kinder received a meritorious service award for what was to be the scariest encounter of his career. While assisting another department with an arrest for unlawful use of a weapon, the person resisted and pulled a handgun from his pocket. Kinder was able to maintain control of the handgun, bring the suspect down to the ground and disarm him, thankfully another successful resolution.

When asked why these bad things happen, he replied, “You can’t understand, because if you did you would be the criminal.”

The gratifying assists could be as simple as helping a stranded motorist change a flat tire. One recipient exclaimed, “You’re a real life saver!”

In his position as Troop G public information and education officer, he has worked with 26 media outlets. With the growth of social media, the need for maintaining multiple social media accounts has increased, while news releases have declined from approximately 50 per year to 10 per year.

Kinder participated in community events and has conducted between 70 and 80 safety programs a year for schools, business and civic organizations. Programs have included information on stranger danger, bike safety, basic drug programs, Internet safety and driving programs. He even participated in producing a traffic safety video for young drivers that will continue to be used. Regardless of the method of delivery, giving the correct information has always been a high priority for Kinder.

“There are good and bad memories everywhere,” said Kinder. This is due to working a large nine county area with Troop G.

Kinder is a firm believer in the Bill of Rights as a necessity for every citizen to have fair treatment and representation. He sees law enforcement progressing to a more social aspect, with more interaction with the community. This would include an increase in cooperation with social workers and officers receiving additional training in de-escalation techniques. Public servants are now also required to be more caretakers than in the past. The career path will require more than just law enforcement, with everyone being held more accountable.

“There has also been a lot of innovation and technical advancement during my career, that helps all law enforcement do their job better and quicker. I would expect that to continue,” said Kinder.

The reality of the job has required a strong support system given by his family, wife, Kelly (Bean), two children and five grandchildren, and his MSHP family.

His never-to-be-forgotten co-worker family includes three zone mates that were killed in the line of duty; Kevin Floyd and Kelly Poynter, both struck by cars while on duty, and DeWayne Graham, who while involved in an investigation, was shot in the back by a person under investigation. Kinder was involved in Graham’s murder investigation and says the murderer is currently on death row.

“I have never dreaded a day going into work, even while I dreaded some of the duties. I have enjoyed my career in law enforcement. I want no do-overs; I would do it all again,” states Kinder.

Kinder’s wife, children and grandchildren joined the patrol family on his last day at Troop G headquarters; they visited and then the family drove him home.

The realization of retirement didn’t really come until the following day when there was no patrol car parked in the drive. He had breakfast, and came in for this interview. When leaving, he was on his way to remove a splinter from his grandson’s finger, because “no one else can do it,” according to his grandson.

Now retired, Kinder plans on becoming a Professional Grandpa to his five grandchildren. His plans also include staying engaged with education programs when possible, and going fishing.

Our thanks go to Ret. Sgt. Jeffery Kinder for his dedicated and honorable service in law enforcement.