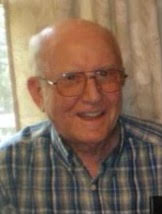 Arley Arlis Wilkins, 92, a longtime resident of Northeast Kansas City, and formerly of Cabool, Mo., passed away peacefully on April 10, 2022, at St. Luke’s East Hospital in Lee’s Summit, Mo., with family at his side.

Arley was born July 20, 1929, in Nebraska, one of five children of Thomas Jahue and Rosa Etta (Dailey) Wilkins. He grew up in Salina, Kan., where he graduated from high school. Following graduation, Arley joined the US Navy where he served on the USS Glennon in the Atlantic and European Theater. He received an honorable discharge in 1952.

Arley’s career as an Electrician spanned three decades at Mid-America Dairymen in Cabool. He was a member of the Teamsters’ Union.

Visitation will begin at 5 p.m., followed by a service celebrating Arley’s life at 6 p.m., on Thursday, April 14, at the Park Lawn Chapel, 8251 Hillcrest Road, Kansas City, MO 64138. Graveside services will be held at 1 p.m. Saturday, April 16, at Hillcrest Cemetery in Mountain Grove, Mo.

Memorials are suggested to Children’s Mercy Hospital. You may share a message with the family or sign an online guest book via www.parklawnfunerals.com. Arrangements: Park Lawn Funeral Home 816-523-1234.