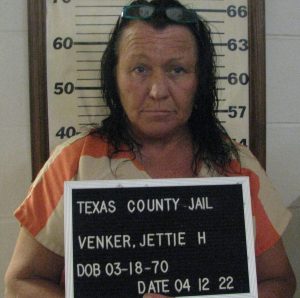 On the evening of April 12, 2022, a Texas County deputy patrolling Route VV in the Licking area observed a Chevrolet Equinox commit a traffic violation. The deputy initiated a traffic stop on the vehicle. During the contact with the driver, the deputy observed signs of drug use and developed probable cause for a search of the vehicle. The driver admitted to being in possession of marijuana and methamphetamine and distributing drugs. A search of the vehicle and property led to the discovery of marijuana and a quantity of methamphetamine in excess of 30 grams, packaged for distribution.
Jettie H. Venker, age 52, of Licking, was arrested and transported to the Texas County Jail. Texas County Prosecuting Attorney Parke Stevens charged Venker with Trafficking Drugs 2nd Degree, Delivery of a Controlled Substance, and other misdemeanor offenses. Veknker was held in the Texas County Jail pending $250,000 bond. 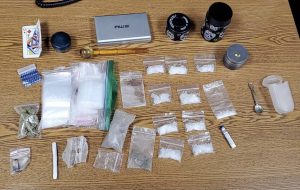