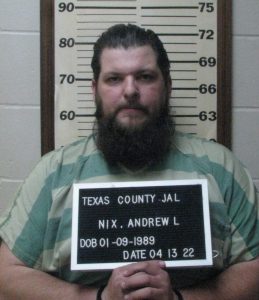 On April 12, 2022, a Texas County deputy began an investigation involving an alleged sexual assault on a child victim. During the investigation the two child victims provided information alleging that an adult acquaintance had sexual contact with them while visiting their residence. The suspect, Andrew Nix, was located and taken into custody. During an interview Nix made statements implicating himself. Nix is a registered sex offender prior to this incident.