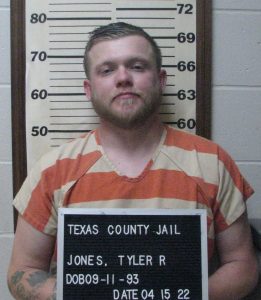 On the morning of April 15, 2022, Texas County deputies responded to a reported domestic disturbance on Route M in the Huggins area. A female subject reported that her boyfriend had threatened to shoot her and prevented her from calling for help. The female stated Tyler Jones was armed with a shotgun while making the threats. The female stated Jones eventually left the residence and she contacted family members for assistance. Deputies located Jones near the residence and detained him. The shotgun was also located near Jones. After being taken into custody Jones continued to make threats toward the victim.