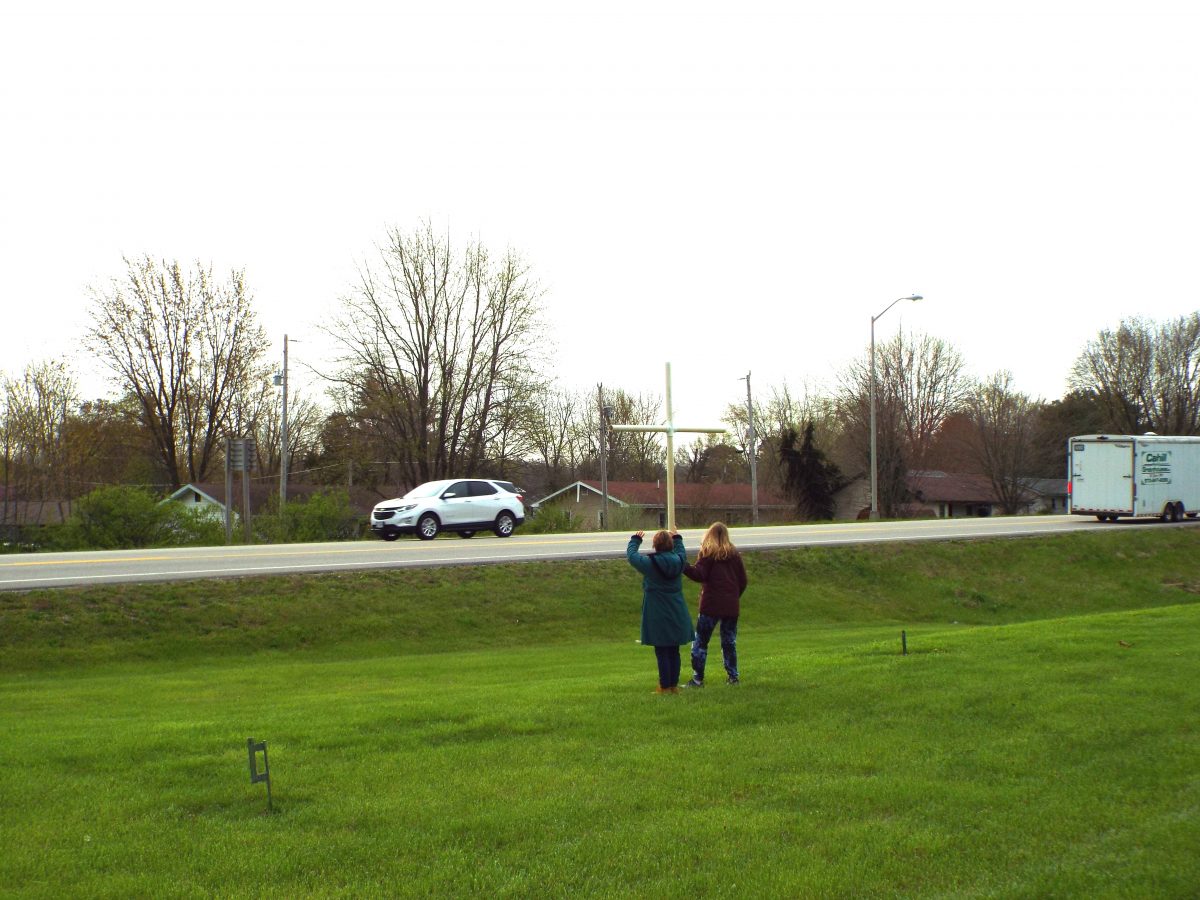 Photo by Christy Porter
Alta and Briana James were among the many volunteers who participated in Carry the Cross, along Hwy. 63, on Good Friday.

Matthew shared Jesus’ foretelling of his death in chapter 16, verse 24. “Then said Jesus unto his disciples, ‘If any man will come after me, let him deny himself, and take up his cross, and follow me.’”

Volunteers exuberantly shared their faith on Good Friday, in Licking and along Hwy. 63, from the south and to the north of Licking.

Drivers responded with enthusiastic, loud and long honks on their horns, waves and smiles.

Among the churches participating were Abounding Hope, Boone Creek Baptist, Destiny Worship, Licking Assembly of God, Licking Pentecostal Holiness, and Rock Springs Baptist. Some fellowships, such as Porter Chapel members located in Competition, came from as far away as Laclede County to share their message, “We love the Lord!”

Living Word Outreach and Renew Church were represented, this was the fifth year for Teresa Clonts who said, “It’s a blessing for us to be able to do this.” With her was Jessica, for her third year, who started carrying the cross with friend Jana Cole. Cole has since passed away of cancer, but Jessica’s daughter wears Jana’s cross necklace so she is still present for the event. The Sonsoucies, including baby Olivia, were sharing the responsibility and joy of presenting the cross to passersby.

This was the first year for the Plato Middle School Fellowship of Christian Athletes (FCA) to participate. The FCA students were in two locations; some also made message signs, “Honk for Jesus” and “God Rocks.”

Crosses were picked up from storage and were then distributed Thursday evening, shared coordinators Erin and James McConnell.

“Carry the Cross gives people a platform to be active in their faith and do something for the Lord,” said Erin McConnell. “The beauty is that ordinary people living ordinary lives and dealing with extraordinary problems encounter the cross.”

The McConnell’s then monitored the locations, providing assistance, water or words of encouragement as needed on the cold morning.

Resurrection celebrations continued over the weekend with sunrise and Easter services, balloons, family, food and fellowship.