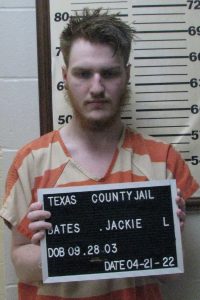 On April 21, 2022, at approximately 9:41 a.m., the Licking Police Department was notified of an incident that occurred on April 19, 2022, involving an eighteen-year-old male, identified as Jackie Lee Bates, making sexual contact with a five-year-old female. The Licking Police Department responded and initiated an investigation. During the investigation, officers reviewed video evidence, which corroborated the allegations made by the victim. During the interview conducted with Bates, he admitted to having physical sexual contact with the under aged victim.

Bates was arrested and transported to the Texas County Jail, where he was placed on a twenty-four hour hold, pending the application of an arrest warrant. The investigation continues and additional charges may be sought as the investigation continues. A Probable Cause Statement has been sent to the Texas County Prosecutor’s Office seeking the following charge for: Jackie Lee Bates, age 18, of Licking, Mo., 2nd Degree Child Molestation – involving a child under 12 years of age.