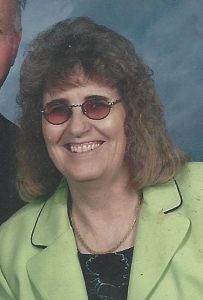 On November 27, 1965, she married Charles Keeney. To this union three children were born, Tamatha, Trina and Darrin.

Connie grew up in Licking and graduated from Licking High School in 1964.

Connie was a member of and attended the Licking Pentecostal Holiness Church from 1957 until health recently kept her away. She had different ministries through the years from Sunday School Secretary to Nursery Worker.

She started her career as a typesetter at the Licking News. Following that she spent many years in the clothing manufacturing industry including Rawlings, Hagale Industries, Kohn Sports, and Tag Uniforms. She started as a screen printer at Rawlings, and ended her career as a plant manager for Tag Uniforms. Upon retirement, she enjoyed staying at home and taking care of her grandchildren and great- grandchildren.

Connie was a true matriarch of her family. Weekly homemade Sunday lunches were accompanied by lots of love and laughter. A birthday was never forgotten and the holidays always cherished. Connie had a love for strong coffee that was passed down to all of Darrin’s children and grandchildren.

She was preceded in death by her son, Darrin; her parents, Andy and Orba Ice; three brothers, Troy, Dwayne and Dolye; four sisters, Lucille, Ruthene, Patsy and Bonnie Lou.