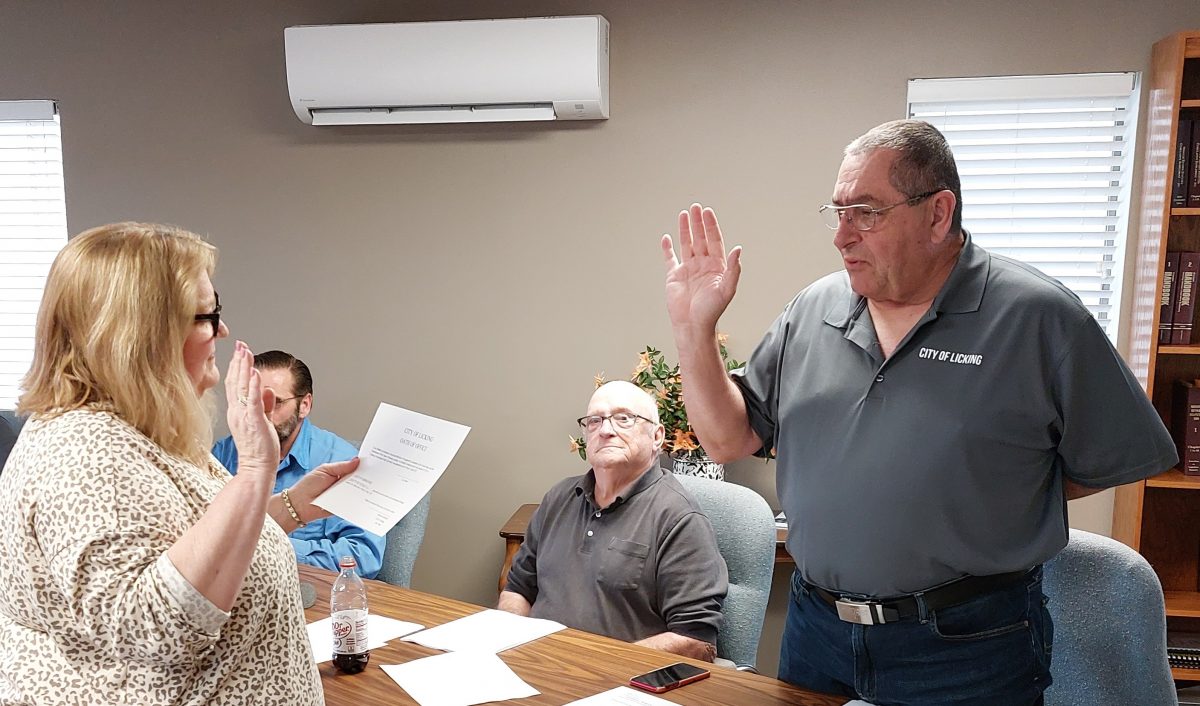 Photo by Shari Harris
Joe Dillard is sworn in as Alderman Ward I.

The results of the April municipal election and the upcoming special election were among the items on the agenda at the City of Licking Board of Aldermen meeting on Tuesday, April 19.

City Administrator Rhonda Kirkwood read the election results and administered the oath of office to Joe Dillard, the uncontested incumbent for Ward I Alderman.

The proclamation of a special election on May 3, 2022, to decide the tie for Alderman Ward II, between incumbent Mike Aiken and challenger Linda Breedlove, was discussed. Alderman Aiken read a statute regarding registered voters changing their address at the polling place, and expressed that he felt this was mishandled at the previous election. City Administrator Kirkwood advised that anyone interested in voting absentee should contact the Texas County Clerk as soon as possible to request a ballot. Alderman Aiken expressed concern that the brief time period remaining before the special election might prevent some absentee voters from being able to vote. City Administrator Kirkwood explained that the special election had already been filed with the Secretary of State, after discussions with both candidates.

In other items on the agenda, Hickory Manor Administrator Tiffani Allen reported a census of 36, with an average of 33 for March. The new Wanderguard alarm system is being installed. All concerns identified during the State Survey have been resolved. Over 4,000 eggs were stuffed for the Easter Egg Hunt Saturday, April 16, and Allen reported they were all pleased with the turnout and with being able to resume the community event this year.

Colton Lewis, Jake Floyd and Ronnie Lewis spoke to the Board about the backstop and dugouts at Field 2 at Deerlick Park. Colton Lewis presented estimates for replacing the backstop, and for constructing permanent dugouts. This would benefit Little League and the high school softball team. Discussions were held and the Board asked Lewis to collect bids for the next meeting.

Terris Cates, Integrity Engineering, provided an update on the water project and reported he and Supt. Larry Ogden had met with the state at the proposed well site. He requested proposals for bids for geotechnical borings and reports for the proposed well and for the anchor pier for the proposed water tower. Cates is to send the contract for design and construction services of the water system to the attorneys, then it will go to the Board. He plans to work on getting permits from MoDOT regarding water lines.

Chief Burton – In March, the police department responded to 272 calls; 11 were related to animals, seven domestic disturbances, three drive offs, four motor vehicle accidents, and 55 traffic stops. The department has been getting equipment installed. Upcoming education is planned for staff. Burton expressed his desire to potentially hire two more officers, and the board approved discussing job opportunities with recruits from the academies. Issues were related regarding the police truck; it does not have a police package, has one battery and a small alternator. Leaving the radio on during patrol drains the battery in two hours. He suggested that if other city departments needed the truck and could take over the lease, and if the police department could acquire two Ford Explorers, that would make a vehicle for each officer (including the two potential new officers).

Manager Rodney Sullins – A pump is being repaired at the treatment plant. He presented prices for a new sewer machine. The current machine, which is used to clean sewer lines, is a 1977 model and is damaging lines and requiring multiple attempts to clean out roots. The Board voted to approve the purchase of the new machine. He reported increased vigilance of DNR on maintenance of sewer lines.

Supt. Ogden – The employees at the park are doing good and learning fast. Rain has been delaying some work. The chippers are back up and going, ready for cleanup day. He is looking at dump trucks.

Chief Sherrill – The structure fire in Licking was kept from spreading to other houses despite high winds due to a combined effort of the fire department, Houston and Raymondville fire departments, and cooperation of the city water department, managing the water flow to the hoses, and the city police department, managing traffic flow and guarding a downed line until IECA could respond. Sherrill said he was proud of the team effort. A nozzle broke on the city truck and it will be replaced. DNR contacted Sherrill regarding tires stacked against the walls at Rinne Tire Pros and Lewis & Sons, but believes they have been moved away from the walls.

In other discussions, streetlights not working were reported to Chief Burton. A citizen complaint was made about a neighbor’s dog, which has been allowed to roam and is biting people. Chief Burton responded that they have had eight or nine dog attack calls this year. The Board agreed that there are many dogs seen roaming the town, either stray or allowed to roam freely by the owner. Chief Burton expressed a desire to discuss a structure to keep dogs if caught by the city, once the tax increase is in place.

The meeting was adjourned.