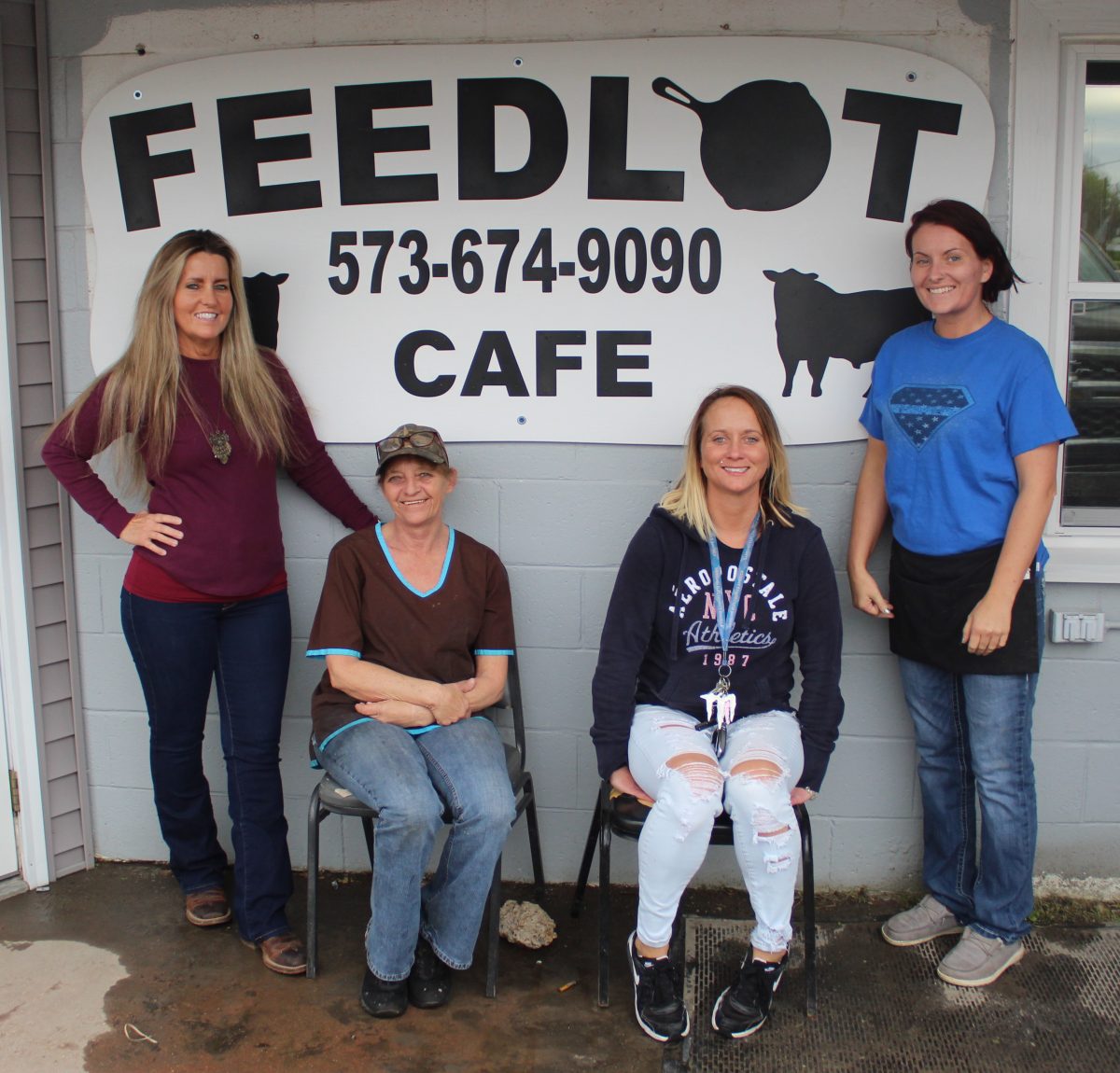 A business with more than 60 years of history in Licking received a new name last week when PJ’s Cafe became Feedlot Cafe. The restaurant was purchased by Wanda and Larry Moncrief on July 24, 2022, and customers have seen gradual changes at the business since then.

In the mid- to late 1950s, Martin and Avon Lotz constructed a small building on Highway 32 on the west side of Licking. They moved Lotz Cafe (known for its barbecue), from its original location, where Shafer’s Smoke Shop is now located, to the new building.

Photo courtesy of Jeff Kinder
An early photo of Lotz Cafe advertised plate lunches for 65 cents and 10 cents for a slice of pie. In addition to tables in the one room dining area, a small counter space was available. A wood stove heated the room. Avon and Martin Lotz are shown, with some of their employees.

Don Lotz remembers his parents opened Lotz Cafe at its original location in November 1952, on general election day. He recalls he was home on leave from the U.S. Army. Eisenhower was elected president and Lynn Wilson was elected Texas County Sheriff for the first time in the election. Martin Lotz was famous for saying, if you could eat a plate of his barbecue without using a napkin, it was free. Don says he never gave any away.

Based on Don’s recollection, Pete and Gladys Routh bought the business from the Lotz family around 1963. At some point thereafter, it became the property of Bill Ray, and his family continues to own it.

Many people recall Ward’s Cafe, which began in the early ‘60s and continued into the early to mid-’70s. Gladys Ward rented the building from Bill Ray, and at some point, added onto the building, making a second room for more customer seating.

Jo Poulson bought the restaurant from Gladys, possibly around 1973. She recalls having Jo’s Truck Stop at the location for two years, featuring Southern style cooking, with free seconds and a helping of Christian witnessing to go along. Weddings, church services and singings were had in the establishment as well. One gospel singing packed the small building with 90 people.

A couple of other owners may have had restaurants over the next several years, but when Lena Berg opened Little Stickers sometime in the early ‘90s, it had been closed for an unknown length of time. A couple of owners later, Diane Trentham opened Grits and Grinds. Two of her employees, Pam Burgdorf and Joan Jackson, bought it from her in 1999 and changed the name to the one most recognized for the location, PJ’s Cafe. The name stuck for more than 20 years. Bill and Joan Jackson bought Burgdorf’s share in 2004, and with the exception of a year when Danny Klotz owned it, they prepared breakfasts and lunches for locals and visitors to Licking until 2020.

“I miss everybody,” shared Joan Jackson. “There are lots of good memories. We had the best customers ever.”

Wanda Moncrief has gradually added her own touches to the establishment. Obvious changes have been made to the exterior and interior, with new siding, windows, flooring, curtains, painting and decor. And most recently, the name change to Feedlot Cafe is evidenced by the new sign on the front of the building.

Wanda credits her workers with the success of the business, stating, “They go above and beyond.”

Kimberly Bufford has been cooking at the restaurant since 2005, and her son, Jesse Bufford, joined her in the kitchen in 2009. Kimberly has been known to see her regulars walking in from the parking lot and begin cooking their order before the waitress can get it to her.

The regular crew is rounded out with Laraea Moncrief, daughter of Wanda and Larry, and Michelle Waldrop, whose duties include waitressing and cooking; Debbie Hayes, waitress; Adrian Lewis and Micheal Bufford. Wanda describes her own duties as “a little bit of everything.”

Wanda credits her father for teaching her that if things are kept affordable, many people can come enjoy them, instead of having high prices that limit your customers. Recent inflation has increased the expense of running a restaurant, but the Moncriefs are doing what they can to reduce the impact on their customers.

“I want a clean place with a good atmosphere, where people can feel at home,” says Wanda. She strives for her business to be “a good place to come in and eat, where the food is good, the prices are affordable and everyone is friendly.”

Wanda has more plans for gradual change in the future. New menus are upcoming, as is some exterior painting. Sunday hours may be added as well, but she couldn’t guarantee it due to staffing.

If you haven’t been there lately, stop by Feedlot Cafe and check out the changes. Or if you are new to the area, stop by 142 W. Hwy. 32 in Licking for breakfast or lunch, Monday through Friday, from 6 a.m. to 2 p.m. You’ll find all your favorite breakfast foods, including eggs, hash browns, sausage, bacon, ham, toast, omelets, biscuits and gravy, pancakes, waffles, French toast, breakfast burritos, and more. Burgers and other hot sandwiches are available for lunch, along with baskets of shrimp or chicken, and fried or grilled chicken salads, chef salads and dinner salads. Daily lunch specials are also available. You can also call in your order at (573) 674-9090, and pick it up to go.