Results of the Special Election for Alderman Ward II were read and certified. Incumbent Mike Aiken received 50 votes and challenger Linda Breedlove had 53. Breedlove took her oath of office.

The minutes of the previous meeting, expenditures for this month and last month, and the court docket for January 1 through May 4 were approved.

Administrator Tiffani Allen from Hickory Manor reported an April census of 35, with 33 currently residing there. She reported DHSS surveyors had revisited with all concerns rectified. There is currently no COVID in the facility.

Terris Cates presented two bids that had been received for geotechnical services. Palmerton and Parrish, Inc., was chosen to do the work for the City.

Chief Burton reported training had been underway for his staff. Sgt. Brian Allgire had received Death Scene Investigation Training. Officer Kaleb Berkshire had received K-9 training. Chief Burton attended a Police Chief meeting. The Board approved the purchase of two vehicles for the department, with the understanding that upon their arrival, the truck would go to the Treatment Plant. Burton announced that former officer Mike Hood was among those being honored in Washington, D.C., this weekend. Burton and Allgire had arranged to be present at the event.

Supt. Ogden reported the park employees are doing well and have started on the pool. A pool pump motor was redone last fall and is a spare now. The new asphalt laying machine is here. He is looking for a good dump truck to use with the asphalt machine. Pavilion ceilings are done.

City Adm./Clerk Kirkwood reported Kelly from MIRMA provided MILO training for the police department. Figures on the dugout have been gotten and discussion was tabled until Colton Lewis could return to the meeting. 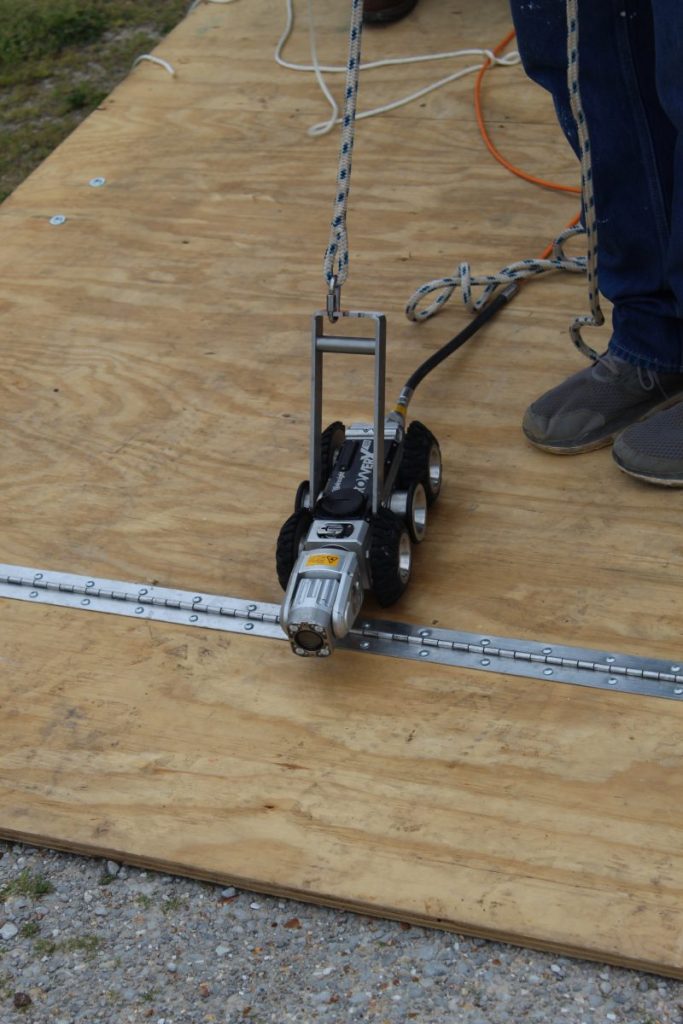 Photo by Shari Harris
The sewer camera can be remote control driven along sewer lines and sends a live video feed to the trailer, allowing inspection of the condition of the lines.

The meeting was adjourned. After adjournment, Sullins and Hammond demonstrated the sewer camera and related equipment. By running the camera from behind City Hall north, behind businesses and the VFW Hall, they were able to show the condition of the clay sewer pipes which were placed in the 1940s. Video from the camera can be seen in real time, identifying obstructions and breakages and allowing repairs to be made.