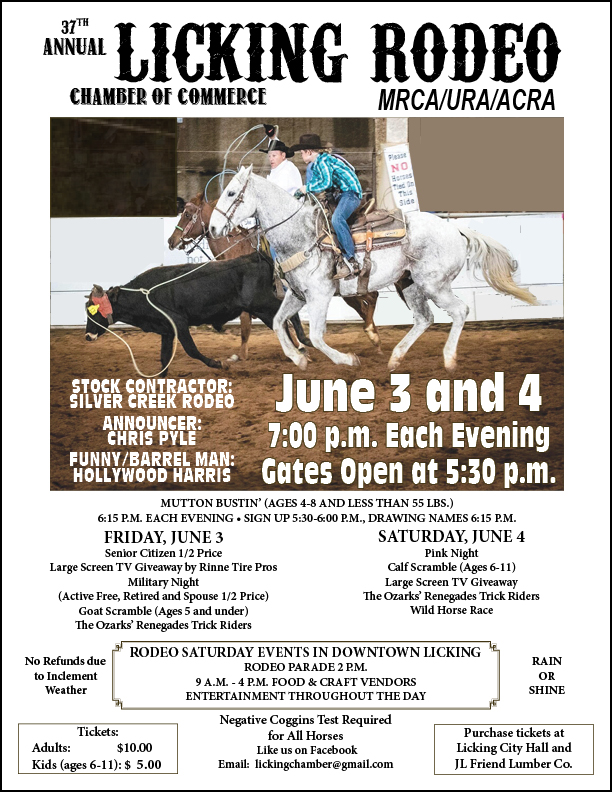 Graduation is a wrap, and Memorial Day is upon us. That means the annual Licking Rodeo is just around the corner. The 37th Annual Chamber of Commerce Licking Rodeo is Friday and Saturday, June 3 and 4, and is an MRCA, URA and ACRA sanctioned event this year.

Each evening begins with Mutton Bustin’, and Friday has a Goat Scramble and Saturday has a Calf Scramble. Don’t forget the two large screen TV giveaways. Friday night, Rinne Tire Pros is sponsoring the giveaway, and Saturday it will be sponsored by the City of Licking.

Rodeo Saturday preparations are well underway. Craft vendors will be set up on Main Street from 9 a.m. to 4 p.m. The Rodeo Parade will make its way downtown at 2 p.m. Entertainment can be enjoyed throughout the day.

Announcer Chris Pyle will return to Licking for his 16th appearance as announcer. Pyle has been a member of the PRCA since 2003. He and his wife, Lisa, daughter, Kendall and son, Luke, live in Pilot Grove. Besides being an announcer for PRCA and other rodeos, he also raises cattle, trains colts and serves as the Special Services Director for the Sedalia School District. After 15 years of bull riding, including earning three Missouri State High School bull riding championships, Pyle began announcing rodeos. He has earned 30 Finals Announcer and Announcer of the Year Awards, including 17 trips to the NFPB finals. He has announced in 35 states.

Pyle remarked, “Rodeo in my opinion is one of the greatest sporting events in the world. It doesn’t get any more challenging than what these men and women will face so they truly need our help. Let’s have a great time and cheer them on!”

“I was born into the livestock business and grew up around rodeo,” says Harris.

He competed for a while, but he was more suited for comedy, and clowning was a natural progression. Harris is regarded as one of the most innovative clowns in rodeo since his start in 1984. He has been chosen to perform at International Finals Rodeos, both as Comedy Act and Barrel Clown. Harris won a record six events at the IFR Contract Act Show in Oklahoma City including Comedy Act, Dress Act and the Barrel Man Competition. After his move to the PRCA, the Professional Bull Riders Inc. (PBR) embraced Harris’s brand of comedy and more importantly, his ability to protect the riders. The Tuff Hedeman Bull Riding Challenge in Fort Worth was his first Bud Light Cup Event, followed by the PBR Finals in Las Vegas, The Laughlin Series Finals and many Bud Light Cup Invitationals.

Harris prides himself on keeping his act fresh and original. He has a popular cast of characters and he loves magic and is an accomplished illusionist and sleight-of-hand artist. Harris knows that what keeps him in tune with the younger crowd is that he is still a kid himself. Rodeo is the reason the kids come… but without Hollywood, the experience wouldn’t be the same.

Special entertainment will be provided both nights this year by the trick riders of Ozarks Renegades. This group of riders awe audiences with their stunts on horseback. Always a crowd favorite, this exciting team is sure to surprise with their feats of athleticism and horsemanship.

Gates will open at 5:30 p.m. each evening, with Mutton Bustin’ warming up the crowd at 6:15 before the main show at 7 p.m. Tickets are $10 for adults and $5 for kids 6-11, with those five and under free. Friday night, active members of the military are admitted free, with retired military and spouses getting in for half price. Senior citizens also pay half price on Friday.

You don’t want to miss the 2022 Licking Rodeo and Rodeo Saturday in downtown Licking.