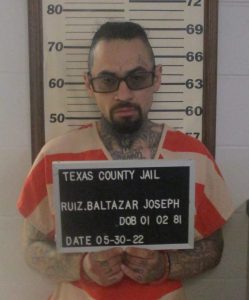 On May 29, 2022, Texas County deputies were dispatched to assist the Licking Police Department with a domestic disturbance on Maple Avenue.

A records check on Ruiz revealed he was a convicted felon and currently on parole for assault. Ruiz was taken into custody and transported to the Texas County Jail.

Baltazar J. Ruiz, age 31, of Waynesville, was incarcerated in the Texas County Jail.

Texas County Prosecuting Attorney Parke Stevens charged Ruiz with Domestic Assault 1st Degree, Unlawful Possession of a Firearm, and Unlawful Use of a Weapon. Ruiz was ordered held in the Texas County Jail without bond.