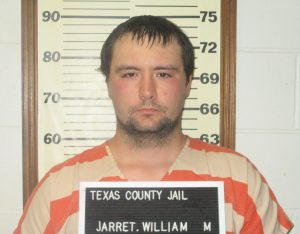 On April 7, 2022, a Texas County deputy opened an investigation into allegations of sexual contact between an adult male and a juvenile female. During the investigation, the male admitted to having sexual contact with the juvenile. A probable cause statement was submitted to the Texas County Prosecuting Attorney and an arrest warrant was issued for William Mark Jarrett. Jarrett was believed to be working out of the state and a fugitive on the warrant. The original filing was eventually replaced by a grand jury indictment. On May 31, 2022, Jarrett was located by a Cabool Police Department officer and arrested on the Texas County warrant.