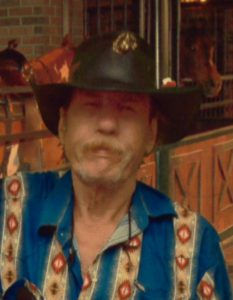 Norman Bruce Evans was born on September 13, 1950, in Wellsboro, Pa., to Norman and June Evans.

He was born and raised in New York, Ohio and New Jersey. He went into the Marine Corp in October 1967 at age 17. He did two tours in Vietnam and got out in October of 1971.

Bruce had some issues but overcame them. He worked in the oil field on gas wells for 23 years as a derrick hand and driller.

Bruce loved the outdoors, fishing, hunting, camping, fires and exploring new places. He loved himself after he quit drinking almost six years. He gave his heart to Jesus and thanked Jesus daily for his many blessings. He had a hard exterior, but a soft giving heart and he helped who he could, when he could, without hesitation.

Bruce is preceded in death by his father, Norman Evans; stepfather, Dick Denhoff; and son, Ricky; as well as many others.

While most people did not understand him, he could always depend on Cindy. He loved family and would protect them as much as possible.

A visitation for Bruce was held on Monday, June 13, 2022, at 10 a.m. at Evans Funeral Home, 224 S. Grand, Houston, MO, followed by a funeral service at 11 a.m. Interment followed at Fort Leonard Wood Veterans Cemetery. In lieu of flowers, memorial contributions in Bruce’s name can be made to the Wounded Warrior Project. Arrangements entrusted to Evans Funeral Home. Online condolences may be left at www.evansfh.com.