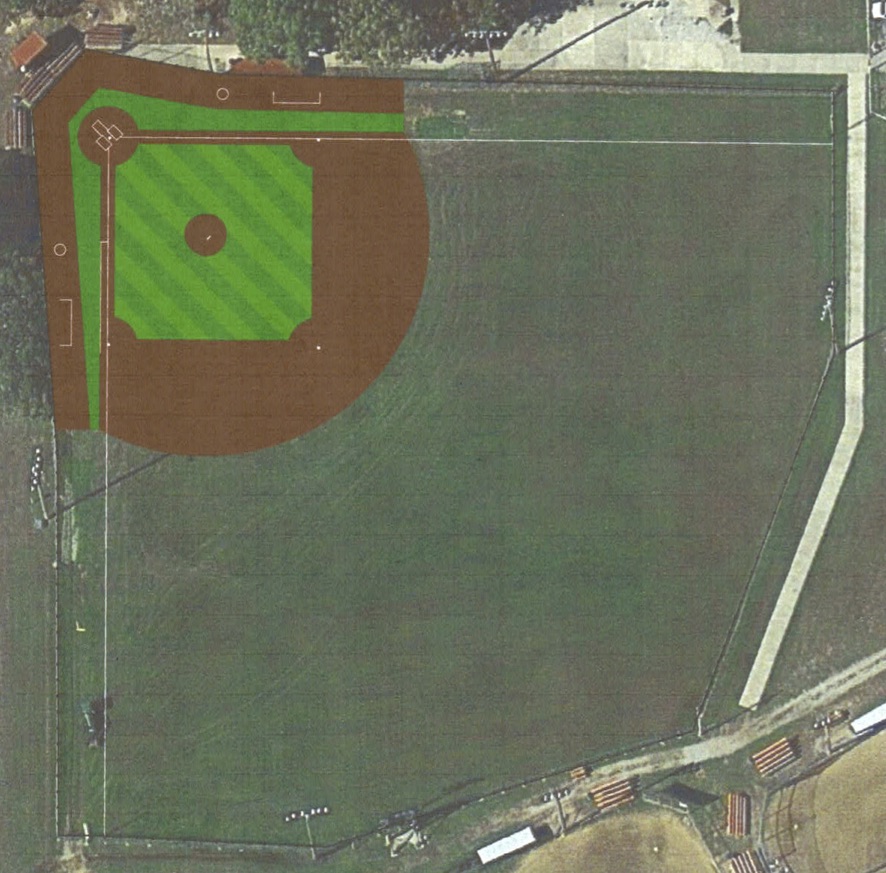 Submitted
Artist rendering of proposed upgrade. The infield would be brown instead of green to better fit multiple purposes if the project goes forward.

Licking High School Assistant Baseball Coach Cole Roark submitted a proposal to the Board of Aldermen on Tuesday, June 14, that would mean major upgrades to Field 1 at Deerlick Park. A proposed synthetic turf infield would relieve drainage problems that currently exist at the field, which allowed only two home games and about nine practices to be held on the field during this year’s rainy spring season.

Other advantages to the upgrade would include movable mounds and bases, allowing softball, Little League and T-ball teams to use the field as well.

Decreased maintenance man hours (volunteer hours by coaches typically) would be anticipated. Ten man-hours of care are currently needed after just a half-inch of rain. Another three hours or more per week of time is devoted to just routine maintenance, such as mowing and painting lines. Other larger projects are regularly required as well, such as dirt replacement, seeding, and repairs to fencing and backstops.

A turf field has the potential to allow a game or practice within hours of a downpour. Furthermore, the decline of the park’s other two fields have reduced their use in the past few years, so making Field 1 appropriate for all to use would be a benefit.

Turf is commonly used for college and larger high school fields, but no one else in our area has it. Mansfield put in a turf softball field, and Waynesville is in the process of upgrading their baseball field to turf, but it will be for school use only. Roark believes that Licking would be chosen to host baseball and softball districts with a turf field, due to the decreased risk of rain-outs.

Another proposed benefit of the field would be the potential to host eight-team tournaments for 12 weekends, May – October. An entry fee could be collected for each team, as well as gate fees and concessions. Roark anticipated this would bring 250-300 visitors to Licking for approximately a five hour time span, increasing foot traffic to small businesses and sales tax revenues.

A portion of the revenue generated could be retained for replacement of the turf, which is anticipated to have a 12- to 15-year life. Replacement of the turf would be cheaper than the $358,431 price tag for the initial field, as the field’s base would not have to be replaced.

Roark suggested that a Park Board might be organized to help manage the project and the ongoing events. Partnerships with other area attractions might also be arranged, to keep visitors in the area longer.

Aldermen and Mayor Cantrell seemed interested in the proposition, and City Clerk/Administrator Rhonda Kirkwood will look at grants to see if money can be found to fund the proposal.