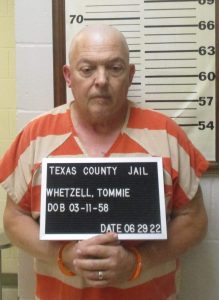 On November 10, 2007, the body of Ricky Luebbert was discovered at a residence on Route H in Texas County near the community of Tyrone. An investigation and autopsy determined that Luebbert died as a result of a gunshot wound. The Missouri State Highway Patrol and the Texas County Sheriff’s Office initiated a homicide investigation. During the investigation a person of interest was identified, Tommie K. Whetzell, who was residing in the Cabool area at the time. The initial investigation resulted in Whetzell being charged and convicted of a federal weapons violation. Whetzell remained a suspect in the open homicide case.

In January of 2022, the Texas County Sheriff’s Office opened a new investigation into the Luebbert case. The sheriff’s office was aided with resources from the television program “Cold Justice.” Investigators from the sheriff’s office reviewed the original case files and evidence. Based on that information, investigators conducted new interviews of witnesses and a suspect, and had additional analysis performed on evidence in the case. Based on the information from both the original investigation and the recently initiated investigative effort a case was presented to a Texas County grand jury by Prosecuting Attorney Parke Stevens. The grand jury returned an indictment for Murder 1st Degree, Armed Criminal Action and Discharge a Firearm at or from a motor vehicle for Tommie K. Whetzell.

Texas County Sheriff Scott Lindsey’s comments, “Today represents an important step in seeking justice for the murder of Ricky Luebbert. I hope that this arrest is of some comfort to the family of the victim, even though it has taken 14 plus years to reach this point. I would like to commend all the investigators that worked on this case, but especially the deputies that were assigned to re-open the investigation and approached it with dedication and perseverance. I would also like to thank the staff and resources provided by “Cold Justice” to assist with the investigation.