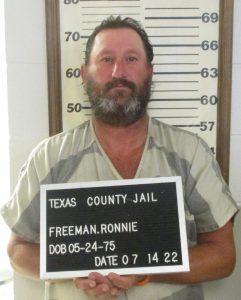 HOUSTON, Mo. (July 15, 2022) – On the evening of July 14, 2022, the Missouri State Highway Patrol initiated a pursuit of a possible intoxicated driver on Lone Pine Road. The pursuit traveled across several county roads along the Wright/Texas county line. The highway patrol vehicle in the pursuit was disabled and a Texas County deputy took over the pursuit on County Line Road. The pursuit continued across several county roads and state routes MM and AK. The suspect traveled to Murr Road from Route AK. The suspect lost control of his vehicle, “spinning out” on Murr Road and came to a stop. The pursuing deputy attempted to stop as well, causing his patrol vehicle to slide and strike the suspect vehicle. The suspect’s vehicle and the deputy’s patrol vehicle received minor damage as a result of the collision. The driver, Ronnie Freeman was arrested without further incident. The Texas County deputy was assisted at the scene by the Wright County Sheriff’s Office.

Ronnie K. Freeman, age 47, of Mountain Grove, was incarcerated in the Texas County Jail. Freeman was held on a felony warrant from Texas County charging him with Driving While Intoxicated Habitual Offender pending a $500,000 bond. A probable cause statement seeking additional charges of resisting arrest, driving while revoked/suspended and possession of drug paraphernalia is being submitted to the Texas County Prosecuting Attorney.