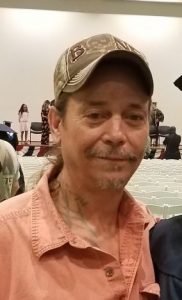 Russ is preceded in death by his parents, Marvin and Nancy Sisco; and birth father, Russell A. Sisco I.

Russell grew up around Licking and attended Licking High School. Russ loved hunting, fishing, breaking horses and riding horses. He was also known for cutting firewood with his sister, Tina, and logs with his birth father, Russell.

Russell was very interested in his Native American belief. He believed that he would later return to his role of a wolf. Based on a general, animal symbolism this was of great significance for all tribes, but wolves were symbols of mythical powers. People believed that wearing the skin of a wolf would turn them into half human, half wolf. Several tribes believed that the Creator of the World was a wolf. The first nations worshiped “Sirus,” the wolf star. They also believed that the wolf star would always lead the tribe home in time of need or the time of a hunt. Before setting out on a hunt, the tribes would perform rituals to invoke the wolves strength. Russell also believed the Christian beliefs.

Russell enjoyed quality time with his two nieces, Ashley and Kayla, and great nieces McKinley and Kimmy of Licking. Russell was looking forward to returning home to Licking with his sister, Tina, to spend the remainder of his life fishing, four wheeling, boating and hunting. He was also looking forward to meeting his three grandchildren and spending time with his children, Shania, Marvin and Cheyenne, of Arkansas.

Russ will be greatly missed by all who knew and loved him.

A visitation for Russ was held on Monday, August 29, 2022, from 5-7 p.m. at Fox Funeral Home, 128 S. Main St, Licking. A funeral service was held on Tuesday, August 30, 2022, at 10 a.m. with Mr. Rick Mosher officiating. Arrangements entrusted to Fox Funeral Home. Online condolences may be left at www.foxfh.net.