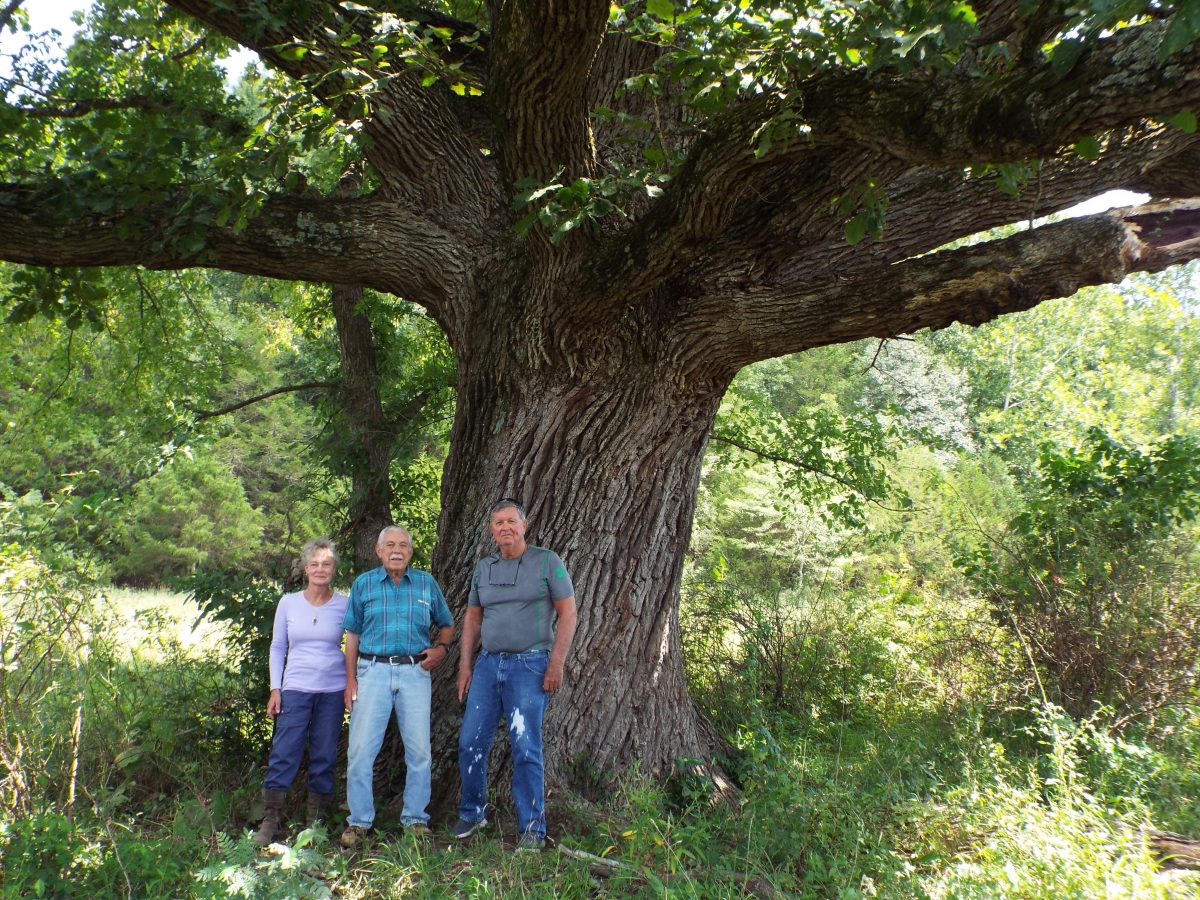 Photo by Christy Porter
Cookie and Dr. Dan Hatch, with property owner Hal Dandridge, stand beside the centuries old Burr Oak tree. Dandridge is six-feet tall as a point of reference on the height from the ground to the first cluster of limbs on the tree.

On a recent field trip, literally a field trip, with Dr. Dan Hatch and his wife, Cookie, we were met by landowner Hal Dandridge. Guided to a remote valley, I was blessed to see a majestic and historic Burr Oak tree named “The Liberty Tree” nestled in that valley, surrounded by younger tree growth, Ironweed, other flora and weeds.

The Liberty Tree stands on a massive trunk with broad, dense and spreading crown and branches. A small home could nestle beneath its shade.

Joel and Aileen Hatch, Dan Hatch’s parents, owned property in the Plato area in the 1970s. Joel Hatch would write of the tree and the history of the property prior to his death. 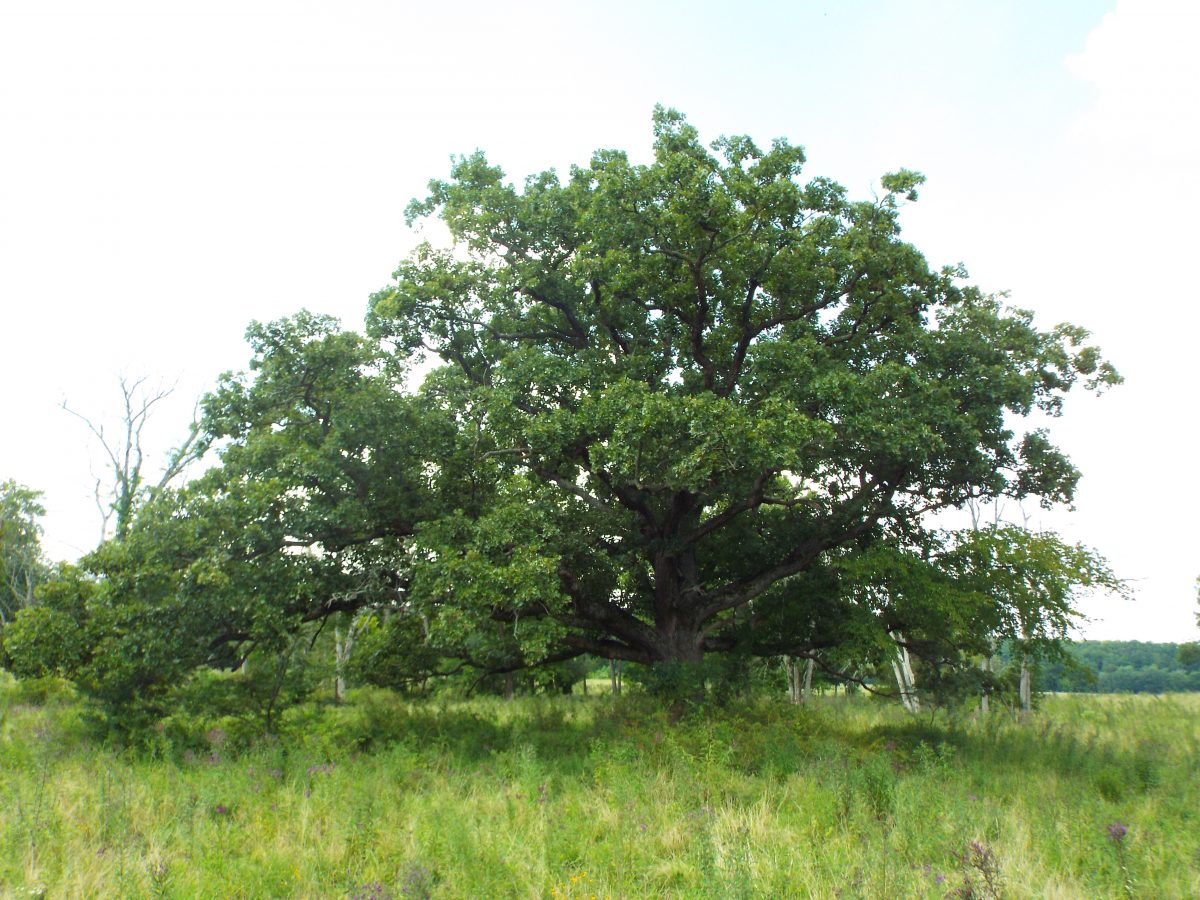 Photo by Christy Porter
The old Burr Oak tree in all its majestic glory!

The large Burr Oak tree on the property was designated as a Bicentennial Liberty Tree by the Plato Forestry District in 1976, and met the qualifications of the Missouri Conservation Commission. The tree must have been at least 200 years old, while older residents of the time estimated the tree to be at least 300 years old.

For comparison of the continued growth of the Burr Oak, in 1976, it measured 164-inches around (a circumference of 13-feet, 8-inches), and today it is 16-feet, 5-3/4-inches circumference; at breast height in 1976, the diameter measured 4-feet, 4-inches, and today it is 5-feet, 2-inches. Tree branches ranged from 12- to 20-inches in 1976, with Hatch and Dandridge estimating the limbs would measure out to 8-, 10- and 12-inch saw logs today; 1976 measurements also included 10-feet to the first cluster of limbs and the limb spread was 116-feet. The Biltmore stick brought by Dr. Dan Hatch, although the largest available, was unfortunately too small to do further measurements. (A Biltmore stick, dating to the early 19th century, is one method to measure tree diameter, height and tree volume. With these measurements the total board feet of the tree can be established, along with tonnage and cubic feet, and would be used in the logging industry.)

Both Dandridge and Hatch were in agreement that The Liberty Tree has likely fared well due to its location, where it has been shielded from wind and lightning, and is also located next to a small spring on its far side.

The Burr Oak is of the White Oak family and is also know as the Mossycup Oak due to its acorns (seeds) that are often as large as a half dollar and have fringed scales (burs) on the edge. It is a slow grower, fire resistant and flourishes in river bottoms.

“All of Missouri should be in the Oak Hickory Biome due to rain and temperature,” shared Dr. Hatch. “The Burr Oak should do especially well in the Ozarks, even in the moist prairies.”

He continued, “While this area was still Indian Territory prior to pioneer settlement, the Native Americans did regular prairie burns that kept the deciduous trees at bay. The Burr Oak survived the burnings as fire favored the pines, and kept the understory cleaned out.”

It has been said that the open groves of these massive trees provided the early pioneers with the most delightful shade they had ever known.

Aileen Hatch sold the property where the tree still stands to Hal Dandridge. The Dandridges are the current owners of the property and kindly allowed us access. With the sale, the property went back into the original pioneer family ownership dating from 1831. This is another story in and of itself, which I hope to pursue in the future.