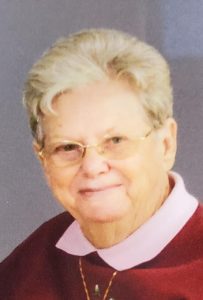 Bobbie Jean (Brinkley) Tripp was born on August 10, 1933, to Warren and Mary (Kirk) Brinkley in Kimble, Mo. She went home on September 4, 2022, surrounded by her family in Licking, Mo. On May 29, 1952, in Mountain Home, Ark., she was married to her true love, Otis Walter Tripp, and to this union they were blessed with three children, Otis Warren, Betty Jean and Kenneth Wayne.

Bobbie Jean was a housewife until her kids got older. She was an amazing mother that showed love and compassion, not only to her rowdy children, but to all the kids that lived near or who were brought home by her own kids. That part of her carried over to when she became a grandmother and great-grandmother. You could not find a more loving, caring and compassionate lady than her. Bobbie was the rock of her family and she was a fighter till the very end. She is going to be missed dearly by all that knew her.

Bobbie Jean worked at Rawlings a few years making baseballs. She then went to work for the Texas County Library in Houston, and she loved that job. She made a lot of friendships that continued even after she retired in the fall of 1997. That is when she took the most important job of her life…great-grandmother. It was pure enjoyment for her. She had the pleasure of being a great grandma to 11 kids, but due to the horrible mind disease, she was cut short on four of them. Still, she loved them all no matter what. Bobbie enjoyed going on vacations with her brothers and sister-in-law, Ross, Glenda and Howard. They went from Missouri to the West Coast, and to the East Coast to Florida.

A visitation for Bobbie will be held on Wednesday, September 7, 2022, from 6-8 p.m. at Fox Funeral Home. A funeral service will be held on Thursday, September 8, 2022, at 10 a.m. at Rock Springs Baptist Church, with Brother Phillip McGuire and Pastor John Jordan officiating. Pallbearers were Donnie Trout, Josh Tripp, Ethan Ullom, Justus Barred, Quinton Trout and Elijah Ullom. Honorary pallbearers were Ellie Ullom, Brinkley Tripp, Jasper Rodgers, Jessalyn Tripp, Levi Trout and Axel Tripp. Interment will follow at Hutchason Cemetery. In lieu of flowers, memorial contributions in Bobbie’s name may be made to Hickory Manor. Arrangements entrusted to Fox Funeral Home. Online condolences may be left at www.foxfh.net.