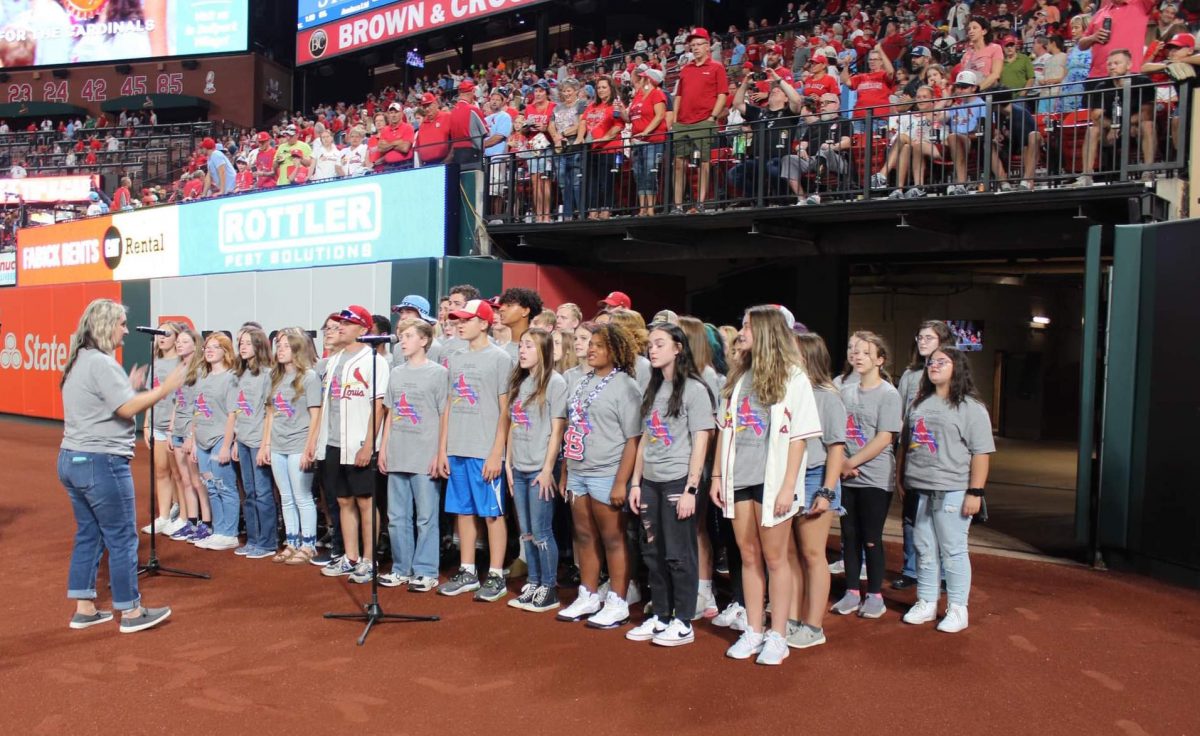 Photo courtesy of St. Louis Cardinals
These 68 students performed under the direction of Mrs. Briana Link during the seventh inning stretch.

On Wednesday, September 7, the St. Louis Cardinals beat the Washington Nationals 6-5 at Busch Stadium in an evening game. A midweek Major League Baseball (MLB) game isn’t where you’d expect to find 240 fans from the surrounding area, but this wasn’t just a baseball game. Mrs. Briana Link, Choir and Band Director at Licking High School, arranged to have her music department sing at the game.

During the seventh inning stretch, 68 Licking High School students emerged from a tunnel onto the field. These 8th through 12th grade choir and band students performed “Take Me Out to the Ball Game” in front of the crowd of Cardinal fans. It was likely an opportunity of a lifetime for many of the students and they gained invaluable experience performing in front of a large audience. It was also the first MLB game many of them had seen.

Prior to the game, during batting practice, four of the upperclassmen had an opportunity to go onto the field. Keyton Rinne, Derek Mendenhall, John Tyree and Finley Sullins received the special honor.

Mrs. Link realized that many of her students like baseball and she knew of a few other area schools that had sung at Busch Stadium. She recognized the potential for the opportunity to increase interest in the music department, and pursued getting her students involved.

Link hopes to be able to repeat the experience in the future, giving even more students the opportunity to perform on such a large stage.

The students performed on the 11th day of school, so preparation for the event was condensed, to say the least.

“They all did really well,” said Link, who went out of her way to arrange this special performance for her students.