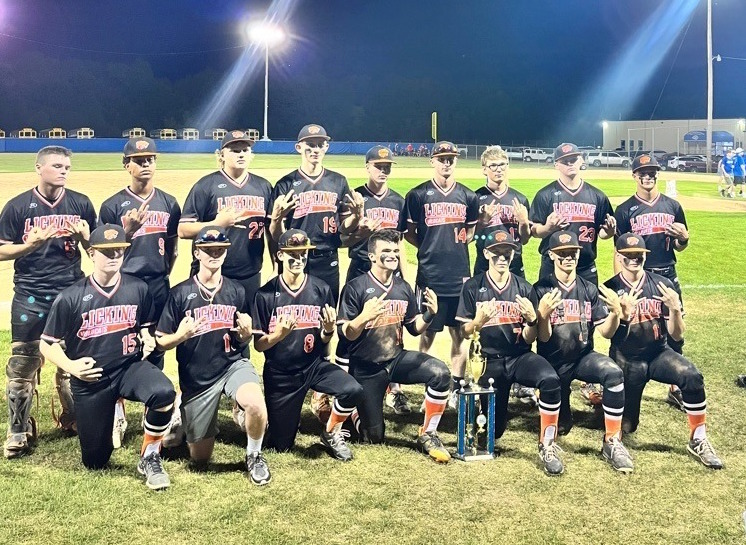 CROCKER – The Licking Wildcats opened the 2022 Frisco League Tournament on Monday with a 16-0 victory over the Newburg Wolves.

Cole Wallace pitched two scoreless innings to get the win for Licking. Alex Buckner finished up with a scoreless inning of relief as the pair of Wildcat hurlers combined for a perfect game.

Wallace was busy at the plate too. The senior went 1-for-1 with two runs scored and an RBI. Malachi Antle and Rusty Buckner doubled and drove in runs for the winners.

Kannon Buckner had a big day at the plate with a double and three runs-batted-in. Logan Gorman was 1-for-2 with a pair of runs scored while Cole McCloy and Jordan Ritz both added RBI singles.

CROCKER — The Licking Wildcats advanced to the championship of the Frisco League Tournament with a 12-0 win over Stoutland in the semi finals on Thursday night at Crocker.

The Wildcats plated eight runs in the bottom of the first inning. They added a single tally in the second and three more in the fourth.

Kannon Buckner preserved the shutout with a scoreless fifth.

Buckner doubled home two runs as part of an efficient Licking offense. Every spot in the lineup produced a hit or run scored.

Rusty Buckner went 2-for-4 with an RBI double. Cole Wallace scored twice, as did Keyton Rinne, while Kale Cook cranked an RBI double.

CROCKER – The Licking Wildcats captured their third straight Frisco League Tournament championship on Friday night with a 5-3 win over the upset-minded Dixon Bulldogs.

Licking was the top seed entering the tournament. Meanwhile, Dixon came in as the sixth seed and knocked off Plato and Iberia to advance to the title game.

Dixon loaded the bases in the top of the first, but starting pitcher Silas Antle escaped the jam with a groundout to give Licking a chance to seize the lead in the bottom of the inning.

The Wildcats went to work right away with a leadoff single from Cole Wallace. Following a balk, Garrett Gorman slashed a single to center to score Wallace. Gorman would score later in the frame on a sacrifice fly and Licking led 2-0 after one inning of play.

Rusty Buckner added to the Licking lead in the bottom of the third with a towering two-run homer over the wall in left. Dixon answered with a run in the top of the fourth when Drew Young led off with a double and advanced on an error before scoring on a groundout.

Dixon closed to within a run in the fifth with a pair of hits, combined with another Licking error. The Wildcats got one of those runs back in the bottom of the fifth.

Buckner struck again, this time with a triple off the center field wall. He scored when Dixon mishandled a fly ball from the next hitter and the Wildcats took a 5-3 lead into the final two frames.

Buckner replaced Antle on the mound in the top of the sixth and went the rest of the way. In earning his first save, Buckner fanned six, walked two and gave no hits.

Antle earned the win with his five innings of work. He struck out six, walked three and allowed four hits as he improved to 3-0 on the fall.

Konosuke Hiroma took the loss for Dixon. The senior scattered seven hits over six innings of work while he fanned eight and walked two.

Wallace paced the Wildcat offense with his two-hit night. Gorman singled in a run and scored twice, Buckner was 2-for-3 with two RBIs, and Kannon Buckner chipped in with a single, as did Logan Gorman.

The victory was the Wildcat’s seventh consecutive win as they raised their record to 7-1 for the fall season.