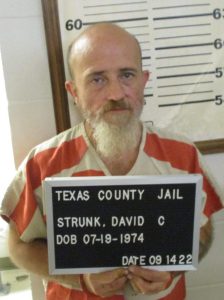 On the evening of September 14, 2022, Texas County deputies responded to a business in Cabool to investigate a reported assault. Deputies were advised that the incident occurred at a residence on Colburn Road. The victim, a 61-year-old male was observed by deputies to have a large laceration on his face. The victim was transported by air ambulance to a hospital for medical treatment with a serious injury. Deputies interviewed witnesses to the incident and learned that a male suspect later identified as David Clay Strunk was alleged to have slashed the victim with a sword. Strunk left the scene and was taken into custody by the Missouri State Highway Patrol near Mtn. View, Mo. Strunk was transported back to Texas County and interviewed by deputies. Strunk admitted to striking the victim, which was a relative with the sword.