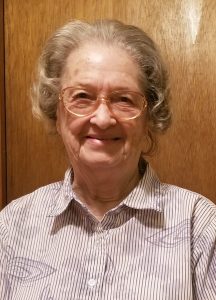 Myrtle was baptized at a young age and attended school in St. Louis, Kirkwood and Troy, Mo. She and her father then moved to the Licking area where she met, fell in love with, and married the man of her dreams, Joseph Riley. They were blessed with four children, Betty Jean Riley of Licking, Connie May Stevens (deceased), infant son Joseph Wayne Riley (deceased), and Jo Ann Cardwell (Robert) of Licking; grandchildren, Carlene Bredahl (Jerry) of Eureka, Halona Bear (Jeff) of Iberia, Gloria Lewis (Larry) of Licking, Jo Ann Robinson (Allen) of St. James, Michele Buckner (Dustin) of Licking, Jennifer Trout (Donald) of Licking, and Jessica Margison (Zeb) of Vevay, Ind.; eleven great-grandchildren; six great-great-grandchildren; and one great-great-great grandson.

Myrtle had a great appreciation for flowers and plants. She loved working in her flower garden, feeding her hummingbirds, and attending and having yard sales. She loved and assembled many beautiful jigsaw puzzles and was a huge fan of the St. Louis Cardinals, watching their games faithfully.

Myrtle is preceded in death by her parents; two infant siblings; and one sister, Marie (Wichmann) Sroaf; her husband, Joseph; and two children, infant son Joseph and daughter Connie. Myrtle will be sadly missed by those whose lives she touched most.