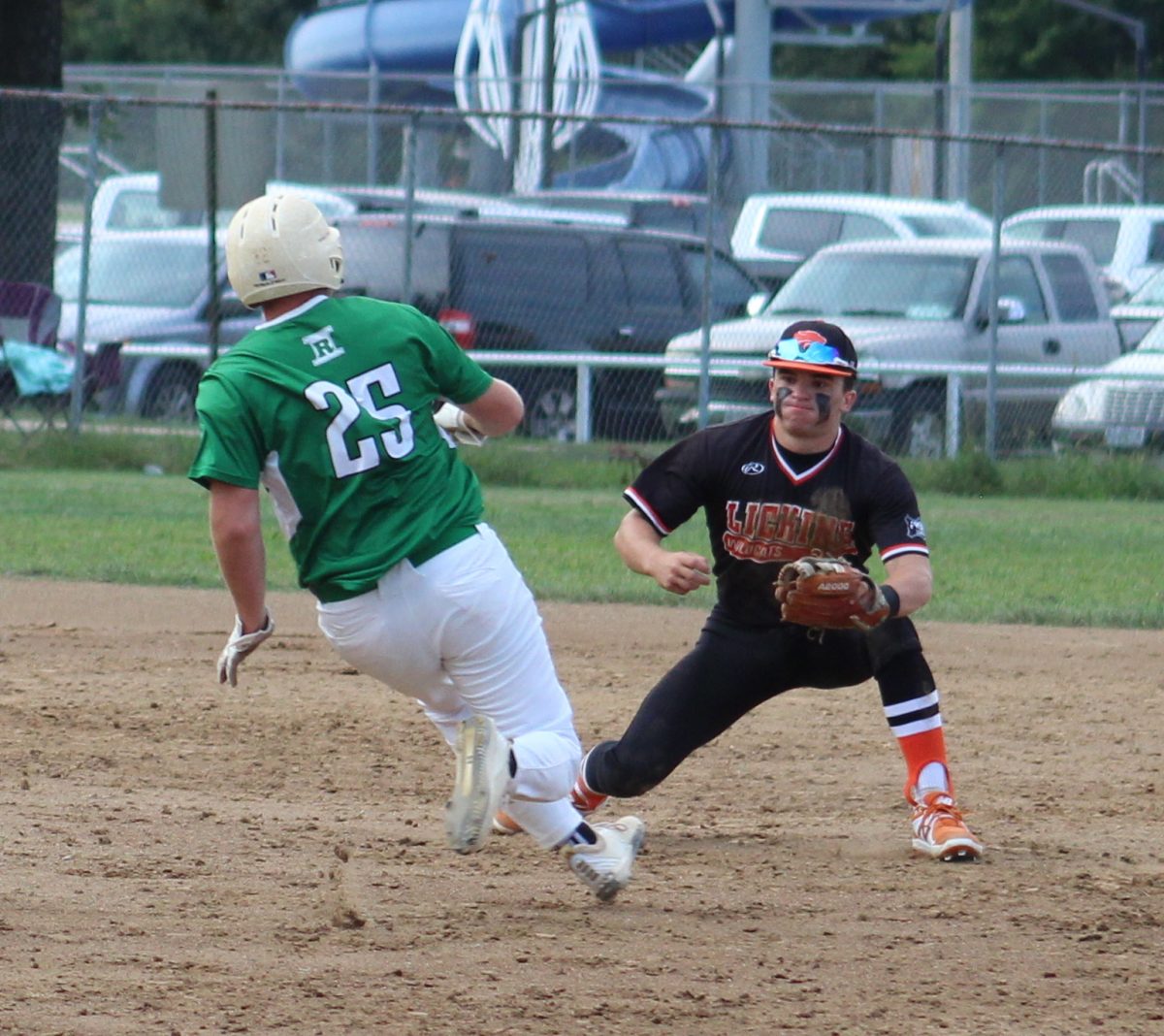 CROCKER — The Licking Wildcats won their eighth straight on Monday night, Sept. 12, at Crocker with a 15-6 decision over the Lions.

Licking broke open a close 4-2 game with seven runs in the sixth. All seven came with two outs.

The Lions answered with four of their own, only to see the Wildcats score four in the seventh for the final margin of victory. Kannon Buckner was credited with the win in relief of starter Cole Wallace.

Wallace was the catalyst for Licking’s offense. The senior was 4-for-5 with a pair of doubles and three runs scored.

Keyton Rinne rapped out a pair of singles, as did Malachi Antle. Rusty Buckner doubled, homered and drove in two; Logan Gorman collected a single and two RBIs, Kale Cook had a pair of hits and Kannon Buckner doubled and tripled for the winners, who improved to 8-1 with the win.

In the JV game, Crocker prevailed 7-0. Isaac Rinne took the loss for Licking.

Rinne and Derek Mendenhall were the only two Wildcats to collect base hits in the contest. The loss dropped the JV to 1-1 on the fall.

NEWBURG —The Licking Wildcats ran their winning streak to nine games with a 23-0 victory over the Wolves at Newburg on Tuesday night.

Alex Buckner was the winning pitcher for Licking. Going the distance, Buckner struck out six, walked one and allowed no hits.

Keyton Rinne cracked a solo home run and drove in two for Licking. Austin Stephens had a pair of hits and four RBIs, Silas Antle doubled twice and knocked in three runs, and Malachi Antle went 3-for-3 and drove in three runs, while Cole Wallace and Rusty Buckner also logged multi-hit games.

LICKING — The Licking Wildcats scored five runs in the sixth inning to come from behind and defeat the Iberia Rangers 6-3 on Thursday night at Deer Lick Park.

Cole Wallace got the win in relief of starter Austin Stephens for Licking. Stephens allowed three runs over five innings, fanned seven and walked one.

Wallace worked a scoreless sixth and seventh. He allowed one hit and struck out two.

Trailing 3-1 in the bottom of the sixth, Licking rallied for five runs on four hits, two walks and an error. Keyton Rinne and Rusty Buckner had key hits in the frame.

Rinne finished the night 3-for-3 with two runs scored and Buckner drove in three runs to go with three hits.

The JV ‘Cats lost a tough 1-0 decision in the nightcap. Iberia scored an unearned run in the first inning and made it stand up.

Cody Cullen was the tough luck loser on the mound for Licking. Brently Morris and Kale Cook contributed scoreless innings in relief.

Cole McCloy led an offense stymied by runners left on base for Licking. McCloy was 2-for-2 and Derek Mendenhall singled for Licking in the loss that left the JV Wildcats below .500 at 1-2.

BELLE — It took eight innings, but the Licking Wildcats defeated the Belle Tigers 12-7 on Friday night at Belle.

The win was the 11th in a row for Licking. It looked as if Licking would coast to victory early as the Wildcats raced to a 7-1 lead through three innings of play.

However, Belle constructed a six-run fourth to tie the game at seven. It stayed that way through seven innings.

In the eighth, Licking loaded the bases with no outs. When the dust settled, the Wildcats had scored five times and closed out Belle in the bottom of the eighth.

Licking (11-1) received a big night from Cole Wallace at the plate. He went 2-for-3, was on base six times, and collected five RBIs.

Rusty Buckner went 4-for-5 with two RBIs for Licking. Kannon Buckner swatted a pair of doubles, and Austin Stephens singled and reached base in all five of his plate appearances.

Karson Walker earned the win with four scoreless innings of relief. The freshman allowed one hit and fanned three.

The JV game ended in a 2-2 tie. Belle scored two runs in the second and Licking tied the game in the fourth, but neither team could dent the plate afterward.

Kale Cook produced Licking’s only runs with a two-run single. Brently Morris was 1-for-2 while Karson Walker doubled and reached base twice.

GREENVILLE – On Saturday, the Licking Wildcats traveled to Greenville for a varsity doubleheader and picked up two victories with a 5-4 decision over the Cooter Wildcats and a 4-1 win over the host Greenville Bears.

In the opener against Cooter, Licking fell behind when Cooter grabbed the lead with a pair of solo homers in the first inning. Licking answered quickly in the bottom of the frame with a two-run home run from Rusty Buckner.

Cole Wallace singled in Austin Stephens and Garrett Gorman in the second inning to give Licking the lead. A walk, a hit and an error brought Cooter within one run in the sixth before the seventh inning provided some drama of its own.

In the top of the seventh with Licking clinging to a one-run lead, Cooter’s first two hitters were retired. Then Hayden Nazarenus, Cooter’s shortstop, tied the game with a solo homer that just got over the wall in center.

In the bottom of the seventh, Keyton Rinne doubled with one out and Buckner was intentionally walked. An errant pickoff attempt moved the runners to second and third.

Cooter nearly escaped the jam with a ground out, but with two outs Rinne scooted home on a wild pitch to give Licking the win and hand Cooter its first loss of the season.

Silas Antle was the winning pitcher as he went the distance for Licking on the mound. The junior scattered six hits, walked two, and struck out four.

Wallace and Rinne both collected two hits in the win for Licking. Wallace had a pair of RBIs, as did Buckner, while Malachi Antle, Kannon Buckner and Garrett Gorman all chipped in with one hit each.

In the second game, Rusty Buckner broke a scoreless tie in the top of the third with a two-run home run for Licking. The Wildcats added a run in the next frame when Rinne singled home Wallace, who had singled and stole second.

Doubles from Wallace and Buckner in the sixth swelled the lead to 4-0 before Greenville broke through with a single run in the bottom of the inning. The Bears did not get any closer as Buckner closed them out in the seventh.

Buckner earned the win with a complete game effort. He gave one run on four hits, walked three, and fanned six.

Offensively, the Wildcats missed some scoring opportunities as they stranded 11 runners on base. Buckner capitalized though with a homer, a double and three runs-batted-in. Wallace scored twice, singled, and reached base three times. Rinne was 1-for-2 with an RBI, Malachi Antle went 2-for-3, and Garrett and Logan Gorman registered base hits as well.

The contest was the end of a stretch of six games in six days for Licking. The Wildcats finished the week unscathed and ran their winning streak to 13 games, improving to 13-1 on the season.

Also on Saturday, the JV Wildcats split a doubleheader with Iberia, losing the first game 8-1 and winning the second game 12-11.

Brently Morris took the loss in game one, while Jordan Ritz turned in a complete game to win the second contest.

On the day, Cole McCloy picked up three hits, Derek Mendenhall had a pair of hits, as did Jordan Ritz. The games left the JV Wildcats with a record of 2-3-1.