Cole Wallace fashioned a complete game victory on the mound for Licking. In four innings, Wallace surrendered two runs on three hits and struck out four.

Rusty Buckner homered, doubled and drove in four runs with a 3-for-4 night to lead the Licking offense. Wallace collected a pair of hits and three RBIs, Keyton Rinne doubled and drove in three runs, Malachi Antle went 2-for-2, while Kannon Buckner and Logan Gorman each drove in two runs and Garrett Gorman tripled and scored twice.

The Wildcats pounded out 13 hits in the game on their way to their 16th consecutive win. The win moved Licking’s record to 16-1.

In the JV game, Licking edged Stoutland 3-2. Cody Cullen was the starter on the mound and took a no-decision with his two innings of work in which he gave two runs, no earned, on one hit with four strikeouts. Jordan Ritz was the winner with a scoreless inning of relief.

The JV ‘Cats trailed 2-1 in the last innings but rallied for two runs to win the game. Cullen and Isaac Rinne each drove in a run for Licking. Kale Cook had Licking’s only hit and scored the winning run on Rinne’s fielder’s choice in the final frame.

PLATO — The Licking Wildcats defeated the Plato Eagles 18-5 on Tuesday night in Plato.

The Wildcats’ offense was powered by a 16-hit attack. Rusty Buckner was 3-for-3 with six RBIs for Licking.

Kannon Buckner picked up the win on the mound for Licking. He tossed two scoreless innings in relief of starter Karson Walker.

Buckner wasn’t the only Wildcat with a multi-hit night. Logan Gorman was 3-for-3 with four runs scored, Keyton Rinne drove in two runs on two hits, Malachi Antle had a pair of hits, Austin Stephens was 2-for-2 and scored four runs and Garrett Gorman doubled and knocked in two runs.

The win was the 17th consecutive victory for Licking. The Wildcats improved their fall record to 17-1.

The JV Wildcats kept their own streak alive with a 16-1 win over Plato. The victory was the fifth in a row.

Isaac Rinne’s 2-for-3 night paced the offense for Licking. Jordan Ritz, Derek Mendenhall and Brently Morris all slugged doubles for the winners.

Logan Gorman picked up the win on the mound. The lefty fanned four and allowed one run on one hit.

LICKING — The Licking Wildcats saw their 17-game winning streak snapped on Thursday night by virtue of a 5-3 loss to the Dixon Bulldogs.

The Wildcats committed three errors that led to three unearned runs and never got their offense going. The Wildcats were held to just two hits by Dixon’s Drake Young.

Young went the distance for the win. He fanned five and walked two.

Austin Stephens wore the loss for Licking. In five innings he allowed five runs, two earned, on eight hits while walking one and striking out six.

Kannon Buckner and Logan Gorman both singled in the loss for Licking. The Wildcats saw their record drop to 17-2 with the setback.

The JV Wildcats fashioned a split for the evening with their 4-0 win over Dixon. Starting pitcher Isaac Rinne was credited with the win after his three scoreless innings in which he permitted two hits and worked around numerous errors. Karson Walker worked a scoreless inning of relief and Brently Morris finished the game, striking out the side in the fifth.

LICKING – The Licking Wildcats battered the Norwood Pirates 21-1 on Friday night at Deer Lick Park. The win came one day after their 17-game winning streak was snapped by Dixon.

Kale Cook was the beneficiary of the generous run support and was the winning pitcher for Licking in his first career varsity start. The sophomore went three innings and allowed one run on one hit as he walked one, hit a batter and struck out five.

Cole Wallace doubled and drove in two runs for Licking and scored three times as the offense racked 17 hits in the contest that was halted on the run rule after three innings. Keyton Rinne was 2-for-3 with two RBIs, Malachi Antle had a pair of hits and two runs-batted-in, Rusty Buckner collected three hits and six RBIs, Kannon Buckner went 2-for-3 and drove in three runs, and Logan Gorman was 2-for-2.

The JV Wildcats won their seventh straight in the nightcap with a 15-0 victory over the Pirates. The win moved Licking to 8-3-1 for the fall.

Cody Cullen and Nate Gambill teamed up for the win on the mound for Licking. Cullen pitched the first four frames and Gambill finished with a scoreless fifth to preserve the shutout.

Karson Walker was on base four times to lead the Licking offense. Walker was 2-for-3 with two RBIS and two runs scored.

EUGENE – On Saturday, Licking traveled north to Eugene to take on the Eagles and La Plata in a varsity doubleheader. In the first game against the host Eagles, the Wildcats registered a 5-0 shutout.

Rusty Buckner was the winning pitcher with relief help from Karson Walker. Buckner worked the first five innings and surrendered three hits and two walks while striking out six.

Walker backed the starter with two scoreless innings in which he allowed two hits and did not walk a batter.

Malachi Antle drove in three runs and Cole Wallace scored three times to lead the Wildcat offensive attack. Keyton Rinne had a hit, reached base four times, and scored twice while Silas Antle turned in a 2-for-3 performance at the plate that included a double.

EUGENE – Licking made it a sweep on Saturday and recorded back-to-back shutouts with a 13-0 victory over the La Plata Bulldogs. The win was the third in a row for the Wildcats and improved their record to 20-2 for the fall season.

Silas Antle turned in a complete game victory for Licking. In five innings, the right-hander allowed just two hits, struck out nine and walked none.

Licking posted 18 hits in the game and used an eight-run third inning to take control of the game. Kale Cook was 4-for-4 with two RBIs for the winners, Malachi Antle collected three hits and knocked in four runs, Rusty Buckner went 3-for-4, while Kannon Buckner and Garrett Gorman each had two-hit games for Licking. 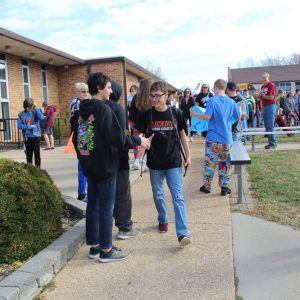