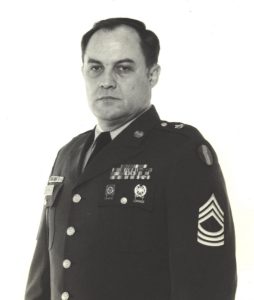 Balazs Miklos “Mike” Szabo was born on July 26, 1939, to Balazs Szabo and Anna (Gorbe) Szabo in Jaszarokszallas Hungary. He was an only child.

He grew up a farmer’s son during World War II. Hungary was occupied by Germany when he was born. He remembers his father grew the best watermelons in the area.

At age six, Russia came to Hungary, which ceased his schooling. He watched the tanks and “Rata” or fighter planes from his windowsill.

After the war, Russia was given all of Hungary and Mike became a card carrying communist.

At age 16-1/2, in 1956, Mike escaped Hungary through Austria. He crossed the border with machine guns firing over his head. He said he ran so hard through the field he was able to jump a six foot black dirt border.

He stayed in Austria about four months in an Army refugee camp.

He then traveled to Italy where they were taking a few hundred refugees. Nuns feed and clothed him. He choose Italy over France, he said, because of the weather and beaches. He joined the U.S. Army on August 21,1957, because recruiters showed him films about how great Army life was. He was 18 and he said this was the toughest time of his life.

The U.S. military flew him to Fort Jackson, S.C., to Language School. He was supposed to be there for 90 days to learn English but only got 60 days.

He took basic training at Fort Jackson with knowing about four words of English. From there he went to Fort Benning, Ga., to Medic School. He was a field medic for one year. From Fort Benning, he went to the DMZ of Korea.

In 1959, he left Korea to come to Fort Leonard Wood, where he changed his MOS to a dozer operator and helped finish the airfield. Nine months later he went back to Korea as a construction engineer.

From Korea he went to Fort Dix, N.J. He got out of the military on August 20, 1962. His reward for five years of service was naturalization papers. It’s at this point he added Miklos to his name and gave himself the nickname “Mike.”

He worked for a construction company in Washington DC for nine months. He got fed up with them and rejoined the Army June 13, 1963.

In August, 1983, he came back to Fort Leonard Wood, where he stayed until his retirement as a Master Sergeant on July 31, 1987. Mike received the following awards during his service of 28 years, 10 months and 29 days:

He resided in the Evening Shade area until his health required him to be admitted to a long-term skilled facility in Rolla, in May of 2020.

Mike enjoyed buying, selling and working on antique cars. His favorite was the 1965 Mustang.

He was a member of the Roby Christian Church since 1977.

He is preceded in death by his parents, Balazs and Anna Szabo; and stepdaughter, Heidi Sibayton.

A graveside service for Mike will be held on Thursday, October 13, 2022, at 2 p.m. at Palace Cemetery in Plato with Avon Lynch officiating. Military honors will be rendered. Arrangements entrusted to Evans Funeral Home. Online condolences may be left at www.evansfh.com.