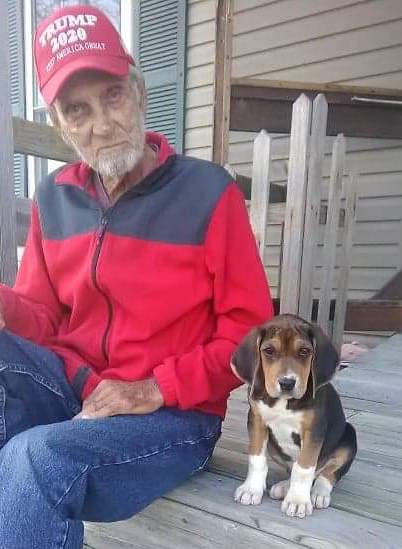 Photo submitted
Paul Jeffries sits happily with his last coonhound puppy, given to him by close friend, coon hunter and breeder Junior Lasseter.

This story comes from a visit with Paul Jeffries prior to his passing.

When Paul Jeffries went to the woods, it was often to the baying of his coonhounds on a chase. He was a professional coon hunter and raised many championship coonhounds; he was also known as one of the best trainers in the U.S. Although he always held full-time jobs, he loved his dogs and fishing.

“The better you are to your dogs, the more they love you,” stated Jeffries when speaking of his bond with his dogs, also commenting, “The kids loved the animals; there is a natural bond between them.”

His travels took him throughout the east coast, southern and northern states; he hunted in swamps and quicksand where you walked on roots. Explaining the procedure, he said, “You hit a trail and left the dogs to tree (the raccoon).” For further explanation, the hunters would follow the baying of the hounds to make the kill. He also noted that there were sometimes some wild men that participated in the hunts.

Coonhounds were developed for the hunting of animals that would take to the tree canopy, such as raccoons and also bobcats, cougars and bears. They weigh an average of 65-85 pounds. Coon hunting may not be as popular now as it was in years gone by, but a good coonhound brings a good price.

Jeffries’ highly sought and prized bloodline began with Ozark Preacher who lived until he was ten. Proudly speaking of Ozark Preacher, Jeffries started the bloodline in 1969 and bred through 2020, resulting in 20 generations. He bred blanket backs but sometimes would get a spotted coat in the litter. One litter had seven blanket backs and one spotted; the mother wouldn’t accept the spotted so that pup was bottle-fed. In a 10-12 year time span, he had eight productive years with litters of eight puppies.

An advertisement for Texas County Kennels, owned by Jeffries, had dogs for sale by the names of “PR” (Purple Ribbon – designating the several generations of a registered bloodline), Starvin’ Marvin, “PR” Hard Knockin’ Wild Bill, and Pete. “These dogs are hunted every night, all night. They are in tough shape. They are not trashy or mean in any way.” Then there was Hard Knockin’ Pete, “a hard, loud tree dog, hunted alone, where coon are hard to tree,” Nite Champion, PKC Champion Mud Slinger, Diamond Jim (who was bought from Jeffries and reminded his new owner of a previous hound, old Jim), Grand Champion Texas County Jeff, and Monroe County.

The winnings of some of the coonhounds owned by Jeffries would be upwards of $10,000, and Jeffries sold some of his hounds for upwards of $3,000. There were times when he’d sell a dog and later say, “If I’d only known what I had.” One dog he sold was “ruined” by the new owner; Jeffries got him back and within two weeks he was back to a good dog.

Attaining a coonhound did not always require money; Jeffries traded Reverend for a car, Mitch Brinkley was traded for a shotgun, and there was one hound that Jeffries bought who won a tenth place and continued to lose after that; Paul gave him back to the original owner.

As a member of The State Coon Hunters Association, Jeffries shared what was a typical meet. “The hunters would meet with 60-80 dogs at the fire station, four in a bunch; each bunch would have one judge and a scorecard. They would hunt for a couple of hours and the highest scoring dog won. There would be prizes, trophies and money.”

Hunting, buying and selling were not the only benefits produced by the State Coon Hunter’s Association. May 22, 1986, Jeffries participated in a benefit hunt for the crippled. The news article read, “First Annual Shriner’s Hospital Benefit Hunt was held in Sullivan May 9-10, 1986. The proceeds from this event, which was about $10,000, went to the Shriner’s Hospital for crippled children. It was sponsored by the State Coon Hunter’s Association of Missouri and Four Rivers Shrine Club.”

Jeffries, then living near Sedalia, won first place Friday night and fifth place Saturday night with Mundo’s Crowding Blaze. He donated Molly, a female pup, which brought top money at the auction. “A display by Jeffries (pictured in the article) also received a lot of attention. The dog was a top line descendent of Ozark Preacher.”

Jeffries was proud of his coonhounds, sharing stories of their protectiveness, “I had a dog named Cotton, a 10-11 month old Walker puppy from Kansas; it was a hot day and we were out. I laid my wallet down and said, ‘Cotton, watch it.’ Cotton wouldn’t let anyone near it.”

And then another time, “I was out at the old bridge at Slabtown, driving an old Ford, with Judge. A car was coming and Judge started growling as the car approached. It was a bunch of kids, and a boy got out and started approaching us. Judge got him. The dog made a judgment and acted on it accordingly; dogs can sense bad stuff.”

In a “For Sale” ad placed by Jeffries announcing the sale of hounds Texas County Rose, Spike and Mundo’s Crowding Blaze, Jeffries says, “I’m not going into detail on all the hounds I have for sale as sometimes some will be sold before the ad comes out. I have several competition type hounds. The best time to reach me is daytime hours, as I hunt every night.”

Jeffries last coonhound was a puppy from his original Ozark Preacher bloodline, given to him by close friend, coon hunter and breeder Junior Lasseter. Lasseter shared, “One of Paul’s priorities during his last years was to help young people learn the sport of coonhunting.”

Paul Jeffries was a United States Air Force Veteran, and lived most of his life in the Texas County, Mo., area.

“I miss the competition,” said Jeffries when ending the visit.