Governor Mike Parson announced Friday that $410 million in grants would be awarded by the Missouri Department of Natural Resources (DNR) to Missouri communities to improve drinking water, wastewater and stormwater infrastructures and to inventory lead service lines. Funding for the grant programs was made available through American Rescue Plan Act (ARPA) State Fiscal Recovery Funds. The City of Licking was selected to receive a total of $10,130,000 in three grants.

Forty communities, with partial funding for another community, were selected to receive a total of $125 million in Drinking Water Infrastructure Grants. The City of Licking was ranked 38 out of those 40 applicants and was awarded $5 million toward their water project.

Another $125 million was allocated for Wastewater Infrastructure Grants. The top 34 applicants were selected, including the City of Licking which ranked 11 and is eligible to receive $5 million toward a sewer project. One community was chosen for partial funding.

Missouri communities submitted 130 applications for their share of $150 million in Stormwater Infrastructure Grants, with 67 receiving funding for their projects and one partial funding.

Ten million dollars in Lead Service Line Inventory Grants was divided between 71 applicants, plus partial funding for another. The City of Licking’s application ranked 6, and the City is eligible to receive $130,000 to assist in an inventory of the community’s service lines to detect lead in drinking water lines.

Applications were scored based on the applicant’s financial need, engineering capability and necessity of the project. Given the limited amount of funding, this resulted in a highly competitive application environment.

“We received approximately 1,000 applications requesting more than $2.4 billion in funding,” said Dru Buntin, director of the DNR. “We designed the specific scoring criteria to ensure that the limited funds available are awarded to projects in a way that maximizes the impact of those funds across Missouri – in communities both urban and rural, large and small.”

In April of 2019, voters in Licking decided to authorize general obligation bonds and revenue bonds in order to fund part of a water project to allow for necessary upgrades of the drinking water infrastructure of the City. A USDA grant, then a DNR grant were sought to pay for part of the project, but the ARPA grant was larger than the others and may reduce the impact on the taxpayers of the community.

Integrity Engineering Inc. engineer Terris Cates reported that the plans and specifications for the drinking water project were submitted to DNR in early October and should be under review. As soon as they issue a construction permit, the project can be advertised for bids. He anticipates another three to six months before breaking ground.

Because the preliminary stages of the drinking water project were already underway, visible progress should be more quickly forthcoming than with the wastewater project.

A Preliminary Engineering Report was completed by Archer-Elgin Surveying and Engineering, LLC and was submitted to DNR with the Wastewater Infrastructure Grant application.

“The next step is developing detailed plans and specifications to be used for Mo. DNR permitting and bidding of the construction work,” according to Jeff Medows, PE, of Archer-Elgin. “The ARPA funds must be spent by 2026. This is a relatively tight schedule for such a complex project as a WWTF upgrade. Design and permitting of the WWTF will likely take 12 -16 months. Construction will likely begin in mid to late 2024 and will take approximately 18 months,” Medows estimated. 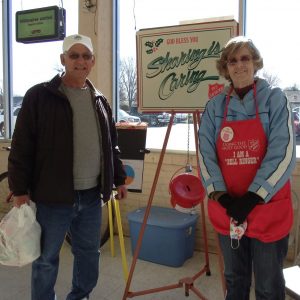 Volunteer for the Red Kettle Drive 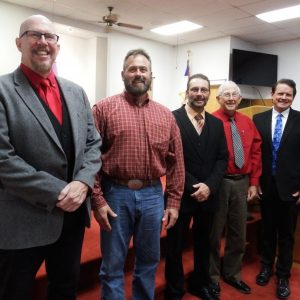 The Ministerial Alliance meets in thanksgiving