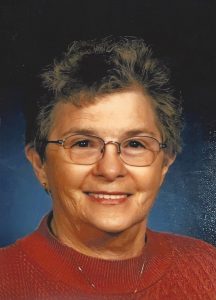 Nadine was an accomplished seamstress and retired from Rawlings in Licking, Mo. She enjoyed sewing, quilting, and often made blankets and clothing for family and friends. She was very active in her church, Abounding Hope, in Licking. She donated time, cooking, and other charitable endeavors to the parish members, who were like a second family.

Nadine was a strong, independent woman who valued her family and friends, and she will be greatly missed.