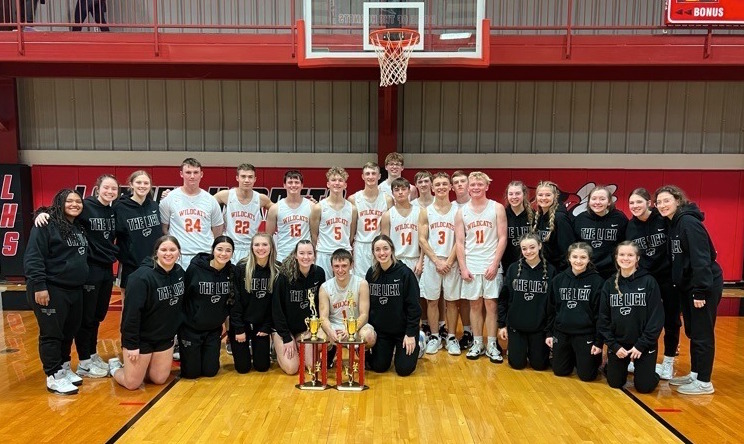 Photo submitted
The LHS Wildcats and Lady ‘Cats brought home the trophies from the Frisco League Conference Tournament, which wrapped up Saturday in Iberia.

The top seeded Licking Lady Wildcats used pressure defense and timely shooting to win the 2022 Frisco Tourney by an average score of 62 to 36.

Licking faced number eight Plato in the first round. Hannah Medlock got the party started for LHS, scoring 10 in the first quarter as LHS led 16-11. Abbie Sullins took over in the second quarter, outscoring Plato by herself 13-7 as LHS took a 41-18 lead into halftime. Kinley Keaton hit two 3s in the third to help extend the lead as the Lady Cats cruised to a 64-31 victory.

The ‘Cats faced number four Crocker in the semi-final round. Licking jumped out to an early 8-0 lead but Crocker responded late to make it 10-9 LHS after one quarter. Abbie Sullins got hot in the second, scoring 8, and fellow senior Kaida Cook tossed in 6 to push the lead to 33-16 at the half. Licking extended the lead to 30 in the third quarter but late 3s from the Lions made the final score 56-32.

The championship game pitted the number one Lady Cats vs. the Cinderella of the tournament in number six Stoutland. Stoutland had pulled off upsets of number three Richland and number two Newburg to reach the title game. Stoutland came out amped up and gave the Lady ‘Cats fits with their speed. The Tigers briefly led, but Licking regained control and led 15-11 after one. The Lady ‘Cats won the second quarter 16-13 to hold a slight 31-24 lead at halftime. Kaida Cook scored 9 in the third to help LHS extend the lead to 19 heading into the fourth. Licking was able to get the lead to 30+ for a while, but Stoutland got hot late to make the final score 66-45.

“It was a good week for us. We faced a variety of defenses and I thought we did well. I think we showed our opponents that we have skill at every spot so it’s hard to focus on stopping just one of us. It is always nice to win this early season tournament.” ~ Coach Rissler.

The Licking Wildcats entered this year’s Frisco League Conference Tournament as the number one seed in the Boys Bracket, and they did not disappoint, overcoming Laquey, Iberia, and, in the championship game, Stoutland to bring home the first place trophy.

Licking played eighth seed Laquey on Tuesday, November 29, and came away with an 84-63 first round win.

Coach Mike Phillips had the following comments about the game. “I am proud of the guys for running hard and flying all over the floor tonight. We had way too many turnovers trying to do too much. I think if we learn to trust each other a little more, the shots will come easier for us. We scored a lot of points for the number of turnovers we had so I expect us to be more efficient with our possessions to get points on the board. We out-rebounded them 51-36 and out-shot them from the free throw line. We were 10/10 and they only shot 6. When we don’t foul and give away free points, I like our chances against our conference.”

In the semifinal round Thursday, December 1, Licking defeated 4th seed Iberia 64-43. The Wildcats led 13-12 at the end of the first quarter and won every quarter.

“I like how our guys are playing. Defensively we look better this year. Our rotations are a little quicker this year. We are shooting the ball well as a team and I would like to see us have a night where we all are hot at the same time. Iberia was big, but we were able to out-rebound them by being more aggressive than they were. We have a few guys with some experience playing our way now and we are going to expect a lot out of them,” said Coach Mike Phillips.

Saturday night’s championship game pitted first seed Licking against second seed Stoutland. Licking led the first two quarters and went into halftime with a score of 32-24. Stoutland rallied in the third quarter, with a 38-36 score in favor of Licking going into the fourth. The Wildcats persevered, outscoring Stoutland 21-13 in the final quarter to end the contest 59-49 and bring home the trophy.

“We shot well early,” said Coach Mike Phillips. “They made some adjustments in the second and third quarters, and we were able to make the adjustments late to hold on to the lead. They threw some junk defense at us and it left some of our guys open. When we were patient enough to find the right guy in the right spot, we got wide open looks. It was a fun game with lots of background stories to it. Cole Wallace is our only senior and he got to win a conference tournament in his senior year. Keyton Cook got a breakaway dunk in the fourth quarter to extend our lead. Carter Sullins missed a couple shots in a row and then hit two 3-pointers to grow our lead after they cut it to one. They left Austin James open in the first quarter and he hit four 3-pointers in the quarter. Roston Stockard had a tough game but came through for us with four straight free throws in the fourth quarter. It was a great team effort to win the championship. With the girls winning the championship also, it was a great night for the Licking community.”