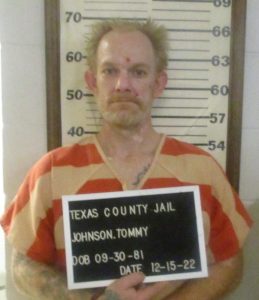 During the early morning hours of December 15, 2022, a Texas County Deputy was dispatched to Route VV in the Licking area for a report of a vehicle fleeing from an attempted traffic stop by the Dent County Sheriff’s Office. The deputy patrolled the area and eventually located a vehicle matching the description. The deputy followed the vehicle, a black Honda passenger car and observed it traveling 86 miles per hour and crossing the center dividing line. The deputy attempted to make a traffic stop on the Honda and the driver fled. The pursuit traveled route VV, Dent County roads and eventually on Monty Drive. The Honda drove off the road and became stuck. While attempting to free the vehicle, the driver reversed and struck the deputy’s patrol car causing minor damage.

The driver and passenger exited the vehicle and attempted to flee on foot. The deputy pursued the driver who was later identified as Tommy Johnson. The deputy deployed his TASER in attempt to stop Johnson. The TASER did not incapacitate Johnson, but he did stop running. Johnson then failed to comply with the deputy’s commands to lay on the ground, instead assuming a fighting stance. A physical altercation then ensued where the suspect struck the deputy with his fist. The deputy was able to overcome the resistance and take the suspect into custody. The passenger was not located. Johnson was transported to the Texas County Jail.