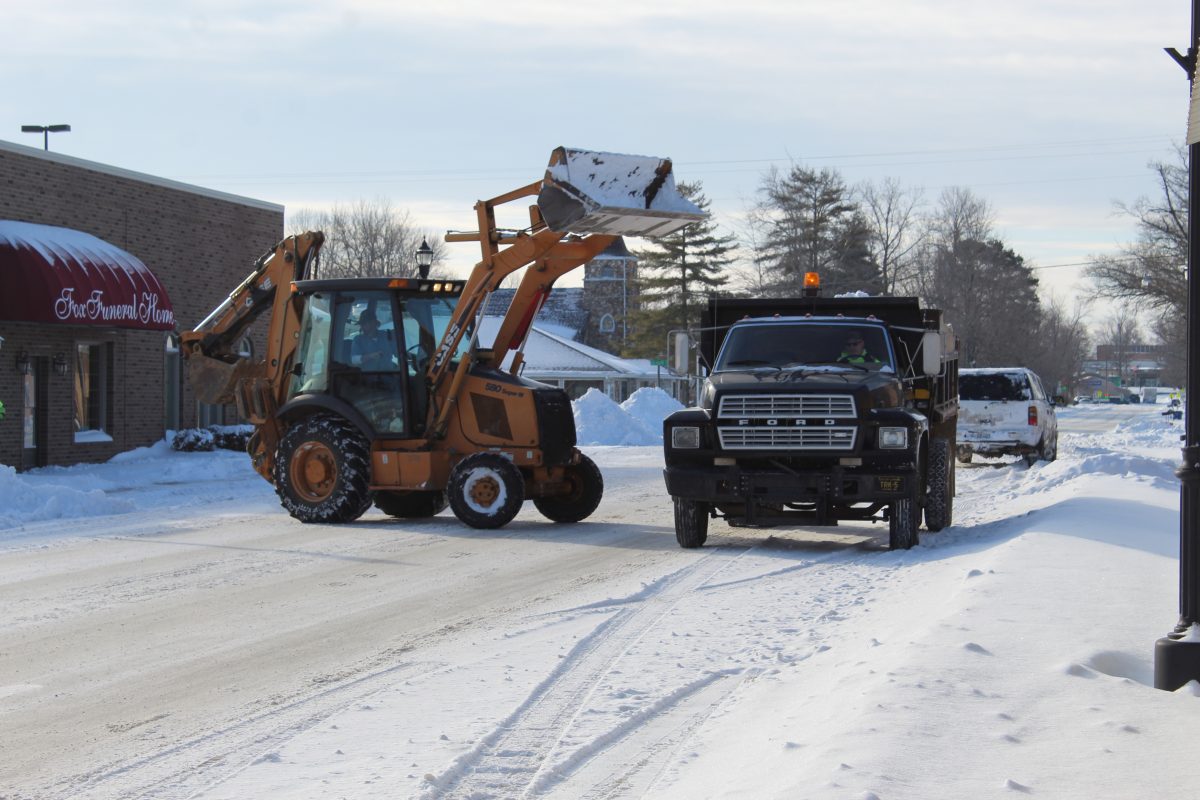 Photo by Shari Harris
The front page featured this photo on February 10, 2022, showing city workers cleaning the snow off of Main Street. School was canceled for a week due to the snowy roads.

January – The CDC began the New Year by updating its recommendations for COVID-19 isolation and quarantine periods.

School was dismissed after a one-day return from the holidays due to snowfall; it closed again mid-month due to the weather and COVID cases.

Michael Nugent was sentenced to life in prison for a 2019 Texas County murder. Human trafficking became an issue in rural communities.

School news included: Sami Hall took district in the American Legion, Department of Missouri Oratorical Contest and then advanced to state, where she placed first runner-up in February; Kasey Richards was crowned queen and Spencer Rogers crowned king at the 2022 Homecoming Coronation; and the VFW Post #6337 awarded Voice of Democracy and Patriot Pen Awards.

February – It was announced that the Licking Alumni Banquet, initiated in 1916, was to be permanently discontinued.

Farmgirl Floral Boutique opened a brick and mortar store after several years as a studio-wedding florist.

The Licking Lady ’Cats won the first half of the Big Cat Classics and the Wildcats won the boys half. The Basketball Lady ’Cats advanced to the District Finals. Licking High School participated in the Frisco League Honor Band and Choir. The Licking FFA Chapter hosted a Community Breakfast.

Former Coach Trish Kissiar-Knight was inducted into the Missouri Sports Hall of Fame.

A second winter storm hit the area in mid-February.

Opening Day of Trout Season was also the first for Kaylyn Dalbom as Montauk’s new State Park Superintendent; additional new faces joined her, as well as some familiar faces.

The Licking branch of the Texas County Library hosted a tea party straight from Lewis Carroll’s book, “Alice in Wonderland.” It was a most important date enjoyed by many.

April – Governor Mike Parson announced an end to the COVID-19 crisis in Missouri.

Joshua Goodchild was arrested in a homicide investigation.

A family joins the work of their hands to open The Flaky Crust, a home-based bakery in Licking. PJ’s Café, a business with more than 60 years of history, became Feedlot Café. The Occasional Trader, an indoor swap meet venue at Cedar Street Marketplace, held a Grand Opening.

The Easter Bunny returned to Old City Park after a two-year hiatus, and “Carry the Cross” continued along Hwy. 63.

May – Special Election results from May 3 named Linda Breedlove as Alderman Ward II, Breedlove was sworn in May 10, at the Licking City Council meeting.

Louise Beasley was announced as the new director for the Texas County Library system.

The 90th FFA Awards Banquet was held; the seniors and Mr. Van Kirkwood all choose to retire their jackets. Kirkwood retired this year.

Sweet Endless Temptations opened for business as the newest diner and bakery in Licking.

VFW Post 6337 held a Memorial Day Service at the Memorial for the Fallen. Veterans were honored at area cemeteries.

The Raymondville Picnic and Carnival was enjoyed by many and considered a definite success.

Kenneth Clark entered an Alford Plea to charges of second-degree murder and kidnapping. The county saw more drug arrests, and a domestic disturbance call led to a drug arrest in Licking.

June – The 37th Licking Chamber of Commerce Rodeo was a crowd-pleasing success, with an estimated 5,000 attendees over Friday, June 3, and Saturday, June 4. The Rodeo Parade took place Saturday. The graduating Class of 2022 Underground Railroad Quilt, made when the students were in the sixth grade, was auctioned on Saturday. Roxanna Hock became the proud owner.

The 5th Annual “Kingtown Cruise In” was also held on Saturday, even bigger and better than previous years.

An employee drug arrest took place at the South Central Correctional Center in Licking, and autopsies were to be performed due to two SCCC offender deaths.

Heat and humidity were a dangerous combination as summer approached, with the first heat-related death reported for 2022.