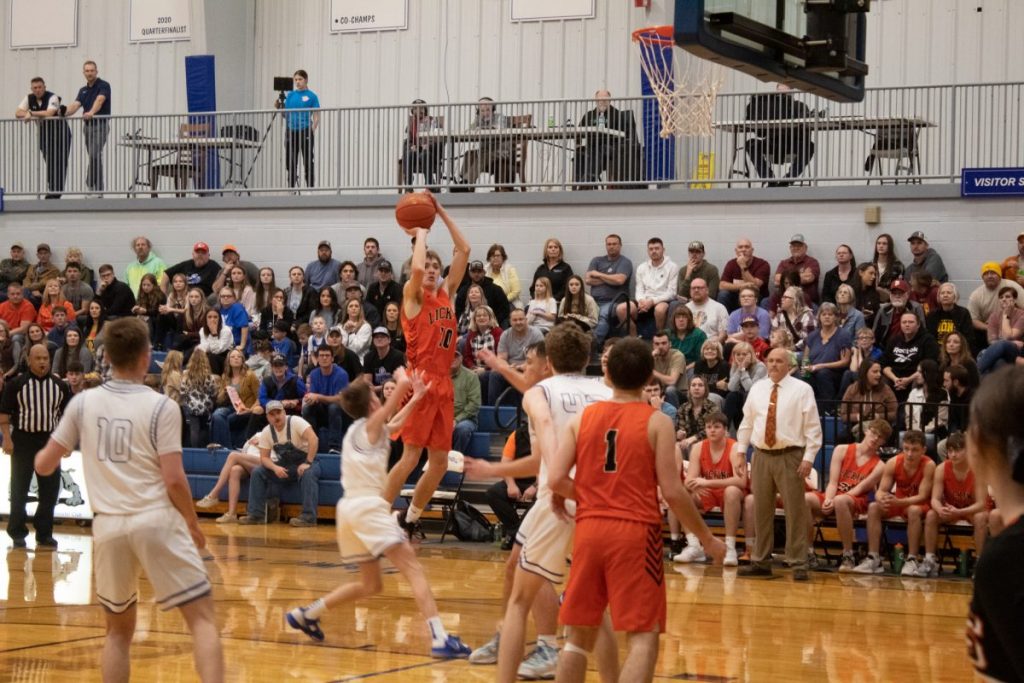 Photo by Winter Murray
Austin James puts up a shot against Norwood in the third place game Thursday.

In the first round game, Licking defeated Viola, Ark., 72-52. The Wildcats trailed at the end of one, 16-19, but turned it around in the second quarter, taking a two point lead (38-36) into halftime. Licking broke the game open in the third and outscored Viola 15-6, and continued their roll through the fourth, 19-10.

“We showed a little rust early, but we were able to play some great defense in the second half to pull away and get the first round victory.” ~ Coach Mike Phillips

Licking met Summersville in the quarterfinal game, and pushed through to the semifinal game with a 61-51 win. Licking added to their first quarter, 2-point lead every quarter.

“We allowed them to control the tempo in the first half and then we were able to speed the game up to our advantage in the second half. It’s nice to see our guys make some adjustments on the floor.” ~ Coach Mike Phillips

“We battled with a state ranked team, but they are a team full of seniors and they showed it with how well they took care of the ball. We couldn’t match their size, but I liked how our guys never let that be an excuse. We will have a little different game plan if we see them in districts.” ~ Coach Mike Phillips

Licking faced Norwood in the third place game on Thursday. Norwood overcame a 12-point first half deficit and took the final two quarters to win by four, 78-74.

“We shot well enough to win this game. Our jumpshots didn’t fall in the third period and we didn’t make the adjustment to get the ball inside enough. We lost the lead a couple of times in the fourth, but kept fighting to get it back. A couple of bad decisions led to turnovers and fouls late in the game and that was something we couldn’t come back from.” ~ Coach Mike Phillips

In a tournament overview, Phillips added, “It was a long week. You could see we were mentally tired as well as physically tired by the end of the week. I’m proud of the guys for making this tournament important. Last year we only played three days. This year we played for a trophy and let everyone know that we can play with the good teams. The next few games for us will be tough. Playing bigger schools and a good conference team mixed in will show if we have gotten any better this year or not.”