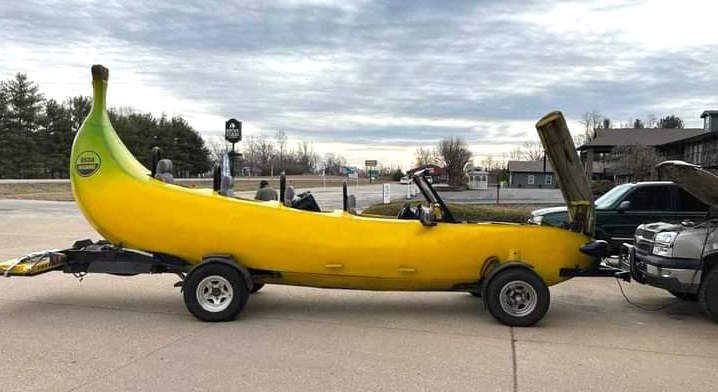 Photo by Cindy Wampner
The Big Banana Car owner Steve Braithwaite not only provided smiles while driving through Licking, he also provided another driver with a jump-start when their vehicle wouldn’t start. That’s a story to write home about.

“My daughter Rhonda and I, along with others, saw this car at Shell (in Licking) on New Year’s Eve,” shared Denece Mitchell in an email to The Licking News. A review of area residents’ Facebook pages presented additional photos of the unique car. So we had to know more.

The Big Banana Car and Steve Braithwaite, of Manitou Beach, Mich., were on their “The World Needs More Whimsy Grand Tour (North American leg).” This leg of the tour was from Michigan to Texas.

Braithwaite likes to take side roads and back roads when traveling, to see the country and to be able to stop and visit local interests. Main roads are driven mainly at night, when it’s more difficult to see the scenery anyway.

In 2009, Braithwaite, the creative designer, with the help of the Mutant brothers, began building what was to become the world’s longest custom “banana car,” at approximately 23-feet in length. It measures just over 10-feet in height at the uppermost “stem.” This brought Braithwaite a place in the Guinness World Records upon the car’s completion in 2011.

The Big Banana Car was constructed with the chassis of a 1993 Ford F-150 4×4 pick-up truck and a fiberglass body. The banana’s top speed is 85 miles per hour and it gets 13-15 miles per gallon. It is equipped with two tanks that carry 52-gallons of fuel.

Creative even as a child, Braithwaite shared the building of a three-person go-cart, one person driving, one resting and one pushing the cart. 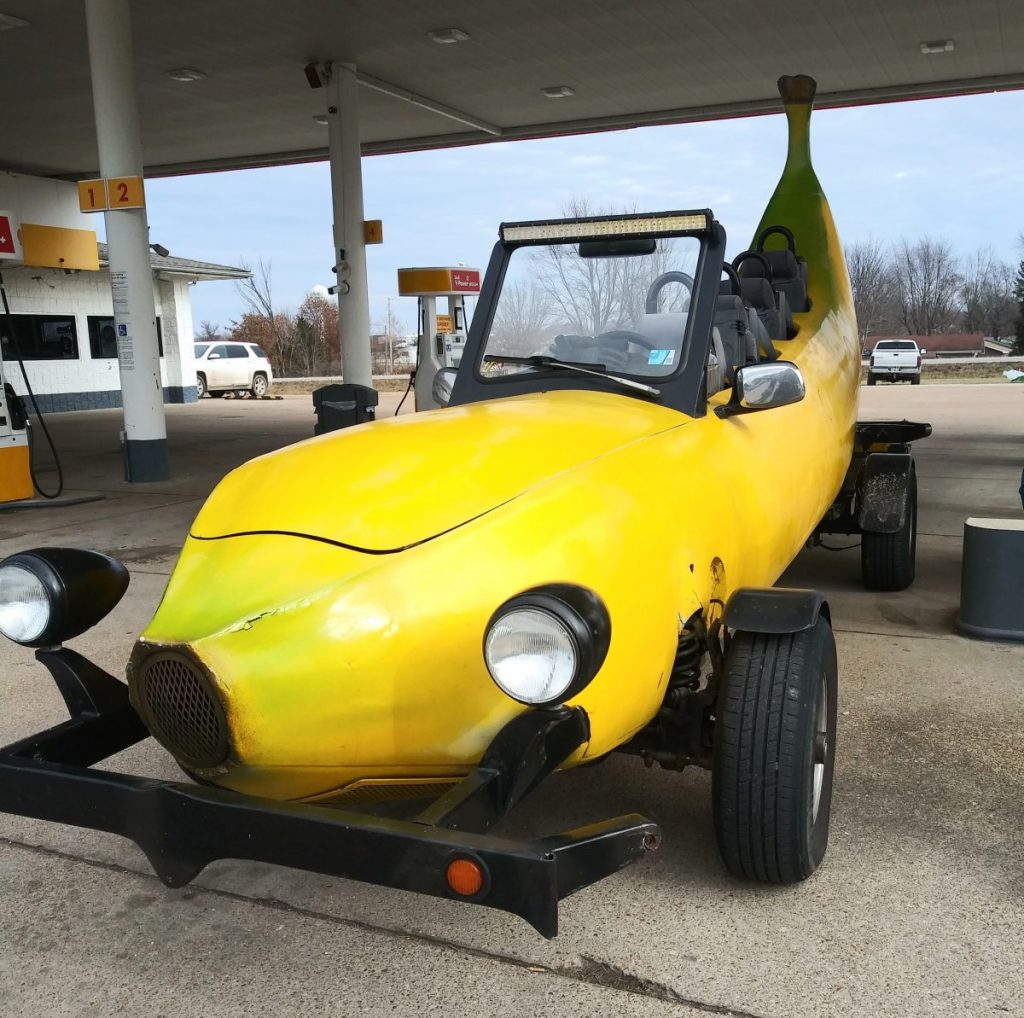 Photo by Denese Mitchell
This front view of the Big Banana Car shows greater detail of the convertible.

“When I built the banana car I wanted to build something that was completely ridiculous,” said Braithwaite, “and there is no other banana car.” Except, after the banana car was built there now are other banana cars…. Mattel, the maker of iconic Matchbox cars, produced miniature replicas of the Big Banana Car from 2020 through 2021.

Braithwaite was born in Woodstock, Oxfordshire, England, and came to the United States in 1986. He has been a radio DJ, internet explorer, is an adventurer and is the owner of GalazyGig.com Webhosting.

He began his tour of the states in 2018, in the bright yellow convertible; Braithwaite hopes to drive it all over the world.

Three passengers can ride along, lined behind the driver. Simon Cowell and costars of “America’s Got Talent,” took the Big Banana Car for a spin and got pulled over by the police. Braithwaite himself has been pulled over while driving the large piece of fruit. Curiosity will do that to anyone, even, or more especially, law enforcement. He has not been ticketed but has been given a donation.

Chronicling and posting his travels on Facebook, Braithwaite is appreciative of the hospitality of customers and people who help support his trips. He enjoys giving rides to kids (of all ages) and has turned his touring rides into fundraising events for those in need. Initially, he raised money for Deep Vein Thrombosis (DVT), a blood clot condition that claimed the life of his mother. Now he wishes to help children with medical issues and with no or limited insurance. By offering “pay what you can” rides, he subsidizes his trips throughout the country, gives joy to others (how many people do you know that have ridden in a banana?), and helps others. Donations range from 70 cents given by a gentleman and his children to the next rider’s donation of $60, other times upwards of $100.

The car also appears in a book collection of over 300 extraordinary artworks called “Wild Art” by Joachim Pissarro and David Carrier, and was featured on Good Morning America. “Forbes” and “Car and Driver” magazines, “The Washington Post” and now “The Licking News,” and so many other newspapers, have shared Braithwaite’s incredibly fun adventures and banana car. 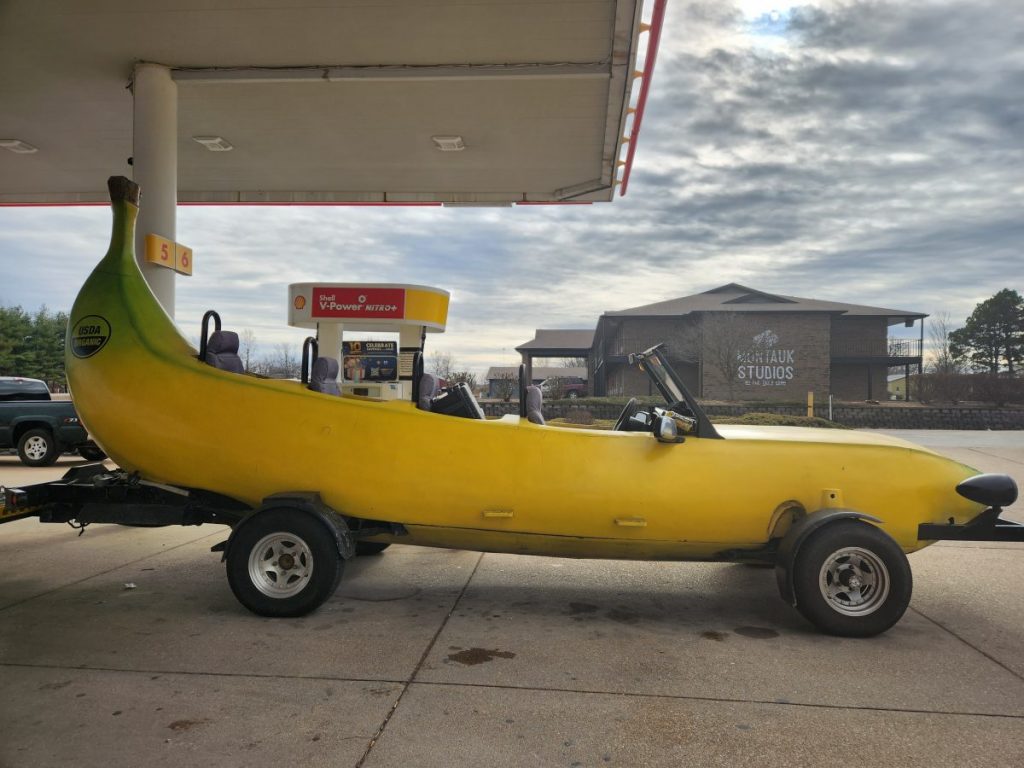